The entire triadfoodies clan has been hitting some bucket list spots lately here in the area. Most of them…well ALL of them…Asian. Did I mention the microfoodies, who surprise me with their annoying quirks about food, pretty much LOVE Asian cuisine? I mean, these kids turn me into a liar. One day, I say they don’t eat anything but grilled cheese and PBJ and then the next day they are scarfing down Tikka Masala like a champ. I mean, what the what??? And it doesn’t stop there. They like Vietnamese, Thai, Japanese, Chinese, Egyptian (??) and Moroccan (I know, NOT Asia). But it’s pretty much nuts since I can barely get them to eat a cheeseburger. It’s exhausting.

Due to being slack about consistent posts, I’ve now, ahem…compiled a lovely treasure chest of goodness that you definitely should check out in Winston-Salem and Greensboro. These are in no particular order except the first one. If I don’t list them first, my kidlets will tackle me and demand all my naan.

My first taste of from scratch Indian food was in my own home when I made a slow cooker Chicken Makhani (Indian Butter Chicken). The flavors were to die for and my children, God bless them, ate it like it was their last meal on earth. I even went all out and allowed them to eat with their fingers as we sat on the floor around our coffee table. Fun times, but I digress. At Nawab, you will eat at your standard table with standard utensils and the flavors there are authentic and delicious and as spicy as you want it. Go Indian hot for the full effect. You can’t go wrong with a delicious Tikka Masala with its slightly smoky, sweet and zesty flavor. Amazing. And we highly recommend getting Rogan Josh. They have various choices with seafood, lamb (which is what we ordered), goat, etc. You GOTTA get the naan bread. Everything is pretty much family style, so the 4 of us shared 2 entrees with plenty left over and clean plates even. Not so sure yet? Nawab has an amazing buffet that has everything from Mango Steak to Tikka Masala to Tandoori Chicken and plenty of veggie options too along with a salad. $12 for the all you can eat buffet. True bliss. It gets busy at lunch so if you get there at peak time, you may wait for your table but it goes pretty quickly. And the service is just impeccable as the owner makes her way to every table to make sure your experience is an enjoyable one. 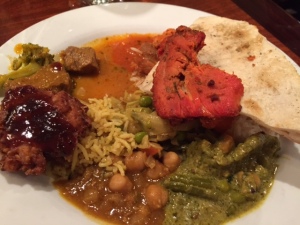 Located in a shopping center on Jonestown Road (as well as a location in Boone) there’s a great selection of Thai specialties and favorites and pretty moderate prices. Food here is also served somewhat family style as most Thai places and it comes out piping hot with fresh vegetables cooked al dente. The boy kidlet even ate his fried spring roll. He was not aware there was cabbage in it so we won’t say anything. I ordered the crispy duck and mr. foodie ordered the Chicken Curry. He gets that nearly everywhere and he has a standard so if it’s delicious then that’s great news. Great spice in the broth that soaked up the rice and great tender chicken. We ordered the boy the chicken fried rice and helped him put a good dent in it. We had plenty left of that though and it was enough to make an entire family of four “leftovers” with some rotisserie chicken. Delicious day of and a few days later. 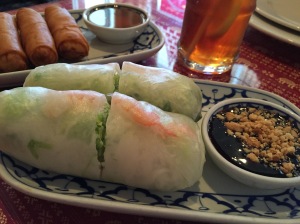 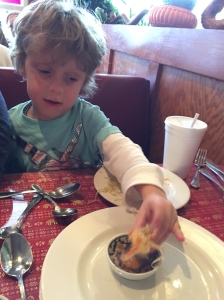 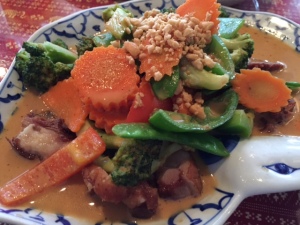 At first glance, this little place in a former something else (maybe a steak place?) looks like you might just pass it by. But we say, do not! Delicious fresh Chicken Teriyaki for the kids, Chicken Curry for mr. (I told you) and it was chocked full of fresh veggies as you can see below and I ordered sushi. It was all really good and it came out in a timely manner with great service. It was pretty deserted but for 3-4  tables on a Sunday evening. Definitely check them out for a nice quiet meal that won’t cost a lot of $$. 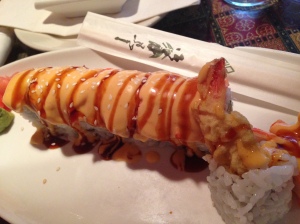 Thai Sawatdee has 3 locations,  but if you ask anybody in WS, they will probably tell you that their favorite Thai is actually the one that’s a walk up counter at the Harris Teeter on Cloverdale Avenue. Affectionately called Teeter Thai. But the new location on Robinhood may be able to give the walk-up a run for its money as there’s way more space to sit and enjoy dinner with your family. I can only speak of the Teeter location which did not disappoint with its Spicy Noodle and Pad Thai. I did think the Pad Thai was on the sweet side, my wide spicy noodles were great. And where else can you end your meal with a quick jaunt over to the dessert section at HT and buy some tiramisu? It’s definitely a perk. Plus you can order, then shop, then have Thai food. That’s pretty awesomely convenient. You ain’t hitting Teeter Thai for the ambiance, that’s for sure. I was just at the HT today to get some olives from the olive bar and I sure wish I’d gotten some spring rolls while I was at it. 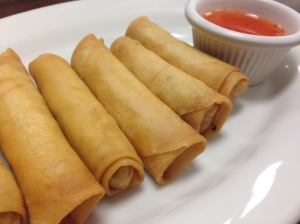 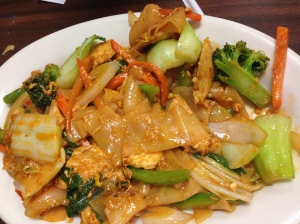 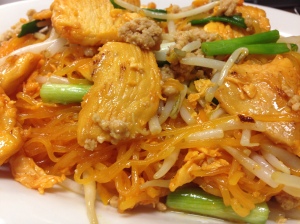 Speaking of ambiance, there’s just about nothing that compares to it Wen Hwa.  Its black and red interior definitely transport you to an exotic place. It’s pretty quiet and the general feel of it is really nice, yet casual. Cloth scroll menus that unroll…pretty cool! Service is terrific and we were checked on a number of times by the lovely owner. The General Tao’s chicken is slightly spicy and amazing, the Singapore Street Noodles are so yummy. Also worth a try is the Sesame Honey Chicken. AND the Chicken Wraps. As I type this I’m thinking it’s definitely time to go back. There’s an entree called Vietnamese Black Pepper Beef & Shrimp that has my taste buds wondering….
UPDATE: We did go back…for lunch…and though the above beef and shrimp dish was tempting, I simply couldn’t pass up the lunch special of General Chicken with Spring Roll for 5.95. It’s really the best General Tao chicken in the Triad bar none. So fresh and crispy and just-right spicy. By the way, I have a STACK of 10% off coupons so if you want one, holler! 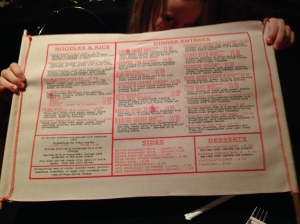 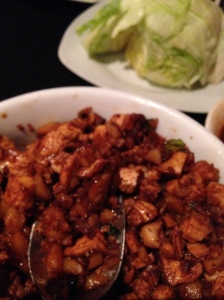 Egyptian and Mediterranean done right. With terrific service and maybe even a visit from the Chef himself. We decided to go for the Babaghanoush, Falafel, Chicken Shawerma and Lamb Kabobs. I really could eat food like this nearly every day. I love hummus, feta, rice, flat bread, all of it. All of the items we tried were freshly prepared and the restaurant itself has a nice Egyptian decor in spite of the fact that it’s in a shopping center that’s anchored by a Staples. For something truly unique, we highly recommend. Plus he has a catering truck! If it just opened on one side, Chef Shaltout would have one heck of a food truck option. I mean, people would flock, don’t you think? 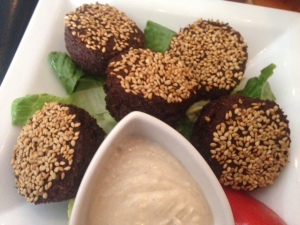 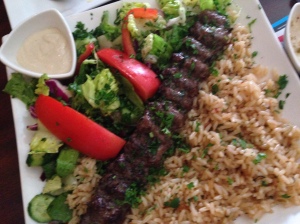 And by no means does being last on this list, mean anything at all except it’s a blend of Greek, Lebanese and other Mediterranean fare so it’s not all Asia all the time at Mooney’s. Mooney’s is definitely one of the more popular restaurants in downtown Winston-Salem at lunch. Sometimes it’s difficult to find a seat. At lunch, you walk up, order and take a number then get your food. At dinner, it’s table service. Of course the hummus and falafel are divine as is the babaghanouj. Here, I’ve also gotten the Shawarma and for lunch I ordered the Kafta with steak. This is a wonderful restaurant in which to just nosh, nosh, nosh.  Hummus, pita, dips, wraps, falafel…so good. Heck for the less adventurous people in your life, they even have burgers! And fries! Win win. 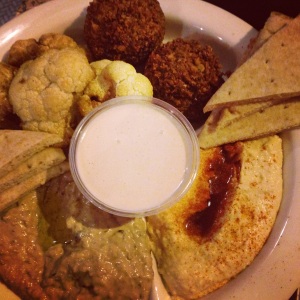 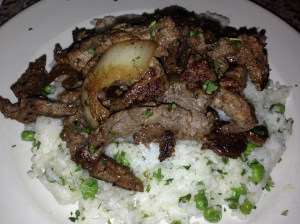 Not pictured above and not to be missed: Phoenix Asian Cafe (1641 New Garden Road, GSO) has been open a few years and looks VERY similar to that large Pan Asian chain restaurant, but I swear it’s even better and the bonus is eating local. Plus, Phoenix has great sushi. My favorite items on the menu are the appetizer, Firecracker Shrimp, and the entree, Spicy Fish. Phoenix’s food comes out so hot that you will have to let it cool before you can enjoy it and that’s okay, right? Very similar in concept in Winston-Salem is Hakka Chow (615 St. George Square Ct) Also with pretty decent sushi and the Hakka Zen Shrimp (kind of like the aforementioned shrimp) and good Chicken Curry. This restaurant is brought to you by the restaurant family that owns Bernardin’s and Bleu so you know they don’t do things halfway. If you find yourself craving that big Chinese chain you find at upscale malls, drive the extra few minutes to the locally-owned version. You won’t be disappointed and you may save a few bucks.

That’s barely touching on all the amazing places to eat that represent such a vast continent. I’ve already talked about Winston’s Mizu and Greensboro’s Pho Hien Vuong and High Point’s Full Kee in separate posts (they’re that good…and…I had way more time on my hands to do separate posts :D). This compilation is  much more convenient for me and hopefully for you. Definitely let me know if you have a suggestion for a can’t miss spot for Asian cuisine in the Triad and beyond.

Until next time, foodies…eat local!

3 thoughts on “Exploring Asia in the Triad”

Cacio e Pepe eggs. Saw @whatsgabycookin do this on a tiktok (kinda … I don’t have it but I figured out enough in the few seconds of the video grab). Soft scrambled eggs in butter and lots and LOTS of freshly ground course pepper and pecorino cheese and a few chives. Serve with toast. Brunch win!
Chicken sandwiches are certainly popular these days especially since they work so well for takeout and this week we reviewed two of Winston-Salem’s newest… @timmys_hot_chicken
A look back at such a fun #triadfoodieschefstable last night at @springhousews with @cheftimothygrandinetti. We got a preview of a global collaboration he’s embarking on with chefs from all over the world next week in Cancun, Mexico. It was a delight and so special to taste what they’ll be tasting next week!
One of the bestest things you can do with a bunch of sweet cherry tomatoes is make tomato confit. Heat olive oil + tomatoes until blistered and breaking and then add smashed garlic and cook 45 min until jammy. Season with salt + pepper and get your bread or pasta ready. Smear and inhale. 🍅 by @brvfarm and 🧄 by @hedgefamilyfarm on @highcountryfoodhub #tomato #tomatoconfit #tomatojam #tomatoconserva #jammytomatoes #tomatospread
One thing I’ve learned to appreciate is a simple homemade salad. This salad of pecorino, olives and pickled chiles from @alisoneroman is super simple and very adaptable. I found the recipe on the @todayshow website but I’m told it’s in her #NothingFancy book. Really truly, herbs, a beautiful vinegar, olive oil … you can’t go wrong.
Mexican pizza night. @moffitttoolanfamilyfarm chorizo with refried beans , tomatoes, cheese and a swirl of a cilantro Serrano lime crema. We finished with green onion and cilantro which I realize is not pictured. A fun riff on taco Tuesday. This crust is @wewalka_usa bistro pizza crust.