Years passed as many walked by wondering what is going to become of the The Pepper Building, a 1928 art-deco landmark ,when several years ago, it was announced that the building had been sold and would become a boutique hotel and restaurant.

Indigo Hotels, owned by IHG, like to spring up in areas that provide their guests with a more local experience. As you walk into the hotel, you’re at once in the Sir Winston Restaurant & Wine Loft and immediately are immersed in a local experience. From the walls adorned by local artists, to Sunnyside Millwork’s handcrafted banquettes, tables, chairs, in fact all of the new woodwork in the restaurant, the focus on those local details are quite obvious.  The restaurant was at one time in the basement of the Pepper Building and the new Sir Winston is a nod to its predecessor of the 1960s and its inspirational namesake, Sir Winston Churchill. People who have eaten at Sir Winston in the 60’s, will see familiar quotes as well as light fixtures found in the sub-basement that have now been repurposed in the bar and dining room. The attention to detail is impeccable.

I mean it’s just lovely. Go upstairs in the loft and enjoy the view. I first enjoyed Sir Winston right after it opened on a date night with my 10-year-old.  Chef sent out a few things for us to try, a boiled egg appetizer, a flat bread with lamb meatballs. My seared scallop dish with pickled local melon was outstanding.  I knew David would kill it at at a Chef’s Table.

I spoke with him for my podcast, “At the Table with Triadfoodies” which you can hear here.

David was hired to design the menu and lead the kitchen of the new Sir Winston, which opened in the spring. Swing, was born in Winston-Salem, grew up in Wilmington, gained his culinary skills in New York City and worked his way back to the City of Arts and Innovation several years ago. He says to build the menu, he had to go all the way back to the late 60’s. “I was given the original Sir Winston menu. I took some ideas from that, but I had to assure management that I would not implement that pricing structure,” David joked.

For context, prime rib back in the day was $2.25.  Sir Winston endeavors to take you back in time enough to appreciate classic details and flavors but bring you back to today’s modern techniques and flair and Swing’s influence of southern cuisine.

Chef took the popular items like seafood and prime rib and put his own spin on it. “Shrimp cocktail was very popular, so I came up with Sutler’s gin pickled-shrimp, which is on our small plates menu as well as on our NC trout dish.” David says they didn’t want to be a steakhouse but did want red meat options on the menu. “To play off the prime rib, all of our signature steaks come off the rib loin, which we break down in-house, including my personal favorite, the cap steak which is featured in the Bulldog’s cut.” He says this steak made the menu after he got his hands on Sir Winston Churchill’s personal cook’s cookbook. Between researching original menus and Churchill’s indulgences, writing and re-writing menus, Swing says he spent at least two months preparing for this gig.

Chef Swing introduced a few new ideas to the guests that will be featured on the upcoming fall menu, but the tasting courses were a great balance of the tastes of summer and a nod to the spiciness of fall.

I love the delicate texture of a stuffed squash blossom that’s been flash fried and it seems like they were made for pimento cheese. This appetizer tasted like summer in the South. 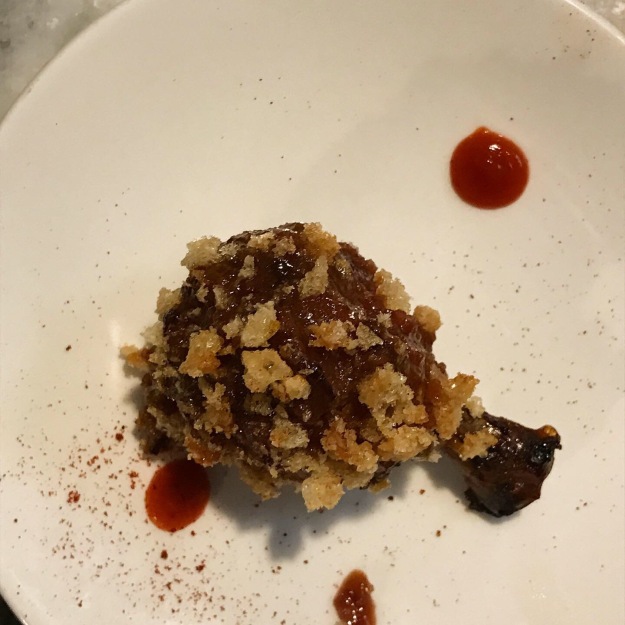 This beautiful chicken drummie was a conversation starter at most tables. The sauce was rich and robust and the pork rind crust added another crispy dimension. I could see this dish on a menu anywhere and it would be a fun lunch item. And Swing must think so too. “I’m playing with smoking Cornish hens and preparing them the say way, with bacon jam and the pork rind crust.” 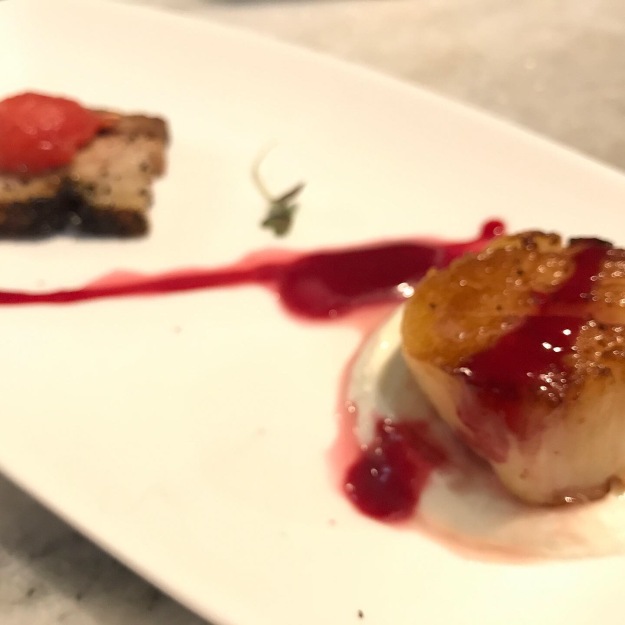 Our very own version of surf and turf. I’ve enjoyed scallops, which are currently on the menu at Sir Winston, and the culinary team prepares them to perfection. 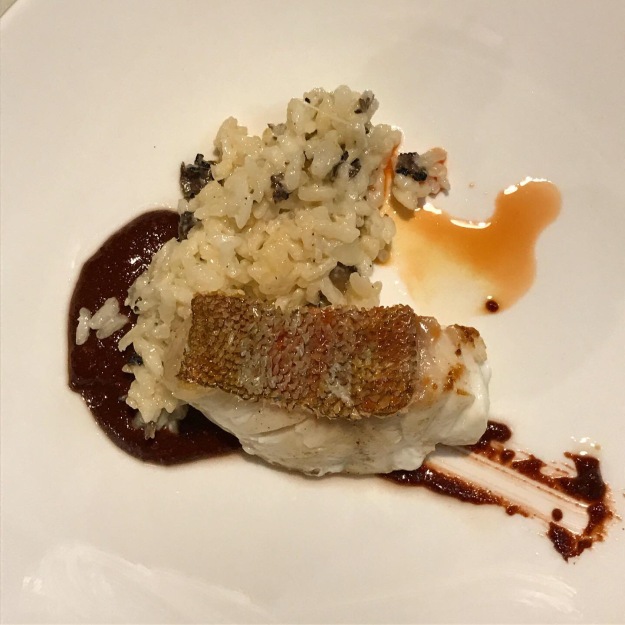 Sea dwellers…twice in one night? What a lovely treat. 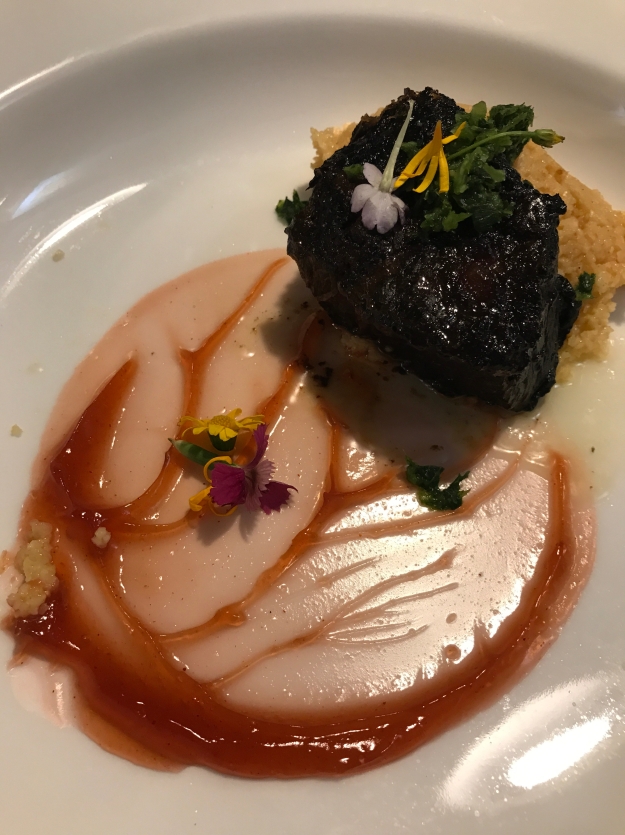 This course was the most comforting of the night. And Swing says there is a variation currently on the menu.

Beautifully presented, the orange and ginger on this petite little cake were definitely reminiscent of the coming season. The mousse on top was definitely adventurous to say the least.

Sir Winston is a hotel restaurant but Swing says he appreciates the company’s approach to embracing the local story. “It does have this corporate backing, but the fact that it’s a chef-driven restaurant and that they said to me, ‘alright chef, here’s very little direction and the ball is in your court,’ was something that I’d been looking for a long time.”

5 INGREDIENT FRIDAY the ubiquitous Pastina. Soooo many ways to make it and it’s so popular all over right now. If you want to keep it to 5 ingredients you’ll need:
Taking our grits up an notch. Take your favorite finished white grits, add lots and lots of pepper and pecorino, some butter at the end and don’t forget the egg cause you’re fancy and living on the edge.
BRÛLÉED EGGS. Jammyish eggs + light dusting of sugar, salt. Torch it and enjoy this take on a kind of expensive snack 😆. Jk it’s only expensive if you snack on a dozen.
Have you ever started making the dinner and then you pivot and it becomes a completely different meal altogether (sorta kinda)? What started out as beef stew (but with Red Weapons from the #thiswillmakeittastegood cookbook by @chefandthef) was transformed with chili garlic sauce, sesame oil and coconut aminos into ramen and it hit the spot. Sometimes you don’t feel like mashed potatoes (well that’s rare lol) but…Sometimes you just for sure need noods. We used @bfrmeats beef stew meat, @sunshinecovefarm micro greens from @highcountryfoodhub
5 INGREDIENT Friday: Zuppa Toscana
Unboxing yesterday and today it’s dinner because we didn’t get home until 6:00 and we were too tired to go anywhere. @batistinifarms and @midssauce to the rescue (along with some Italian sausage) dinner in about 30 minutes.