When you visit Blue Denim, it might be a good idea to wear your stretchy jeans.

Located in the heart of Downtown Greensboro (217 S. Elm Street), lovingly nicknamed “Jeansboro,” as an ode to the city’s textile heritage, particularly to Cone Denim, Blue Denim has established itself as a cozy, modern eatery with a focus on creole and cajun fare. Owner Jody Morphis, came to Greensboro by way of New Orleans in 2000. His first job in the Gate City was at the former Restaurant Pastiche. Five years later, Morphis opened Fincastles Downtown, a beloved burger-centric diner that became a part of Greensboro’s locally-owned burger boom. After enjoying 10 years at Fincastles, Morphis sold the diner and stepped away from the kitchen for a brief while. But the proverbial phrase, “I could not stay away” rings true here. So in 2015, Morphis and his wife opened Blue Denim, right next door to the former Fincastles (now White and Wood Wine Lounge).

Opening a cajun restaurant wasn’t too far a stretch, as Morphis often featured a Mardi Gras menu at Fincastles that was quite popular. Morphis grew up in Meridian, Mississippi, and after college went to culinary school in New Orleans. There he stayed as a chef in New Orleans at Cafe Giovanni,and then at House of Blues. “I always loved gumbo and étouffées. Growing up in Mississippi, we grew up on that too,” Morphis told me. An eclectic globally-inspired menu with a cajun and creole focus takes special attention and Morphis says he enjoys playing around with flavors and local ingredients.

While many of the featured chefs “surprise” the guests with the multiple courses, some like to present a menu and Chef Morphis’s menu was presented beautifully with a custom printed napkin tie to mark the occasion. Each course was detailed in such a way to highlight a region or event that is meaningful to Morphis and we noted that here with each course.

This little crepe like “pillow” was beautifully presented. The creamy filling worked beautifully with  the sauces and demi. You know how it’s so yummy to take the last bite and dredge it through all the beautiful glazes? Every bite was like that. Guest Scott Fancett declared, “This sauce is so good, it should’v come with a spoon.”

“Chabaud is the last name of the family that kind of took care of me when I lived in New Orleans,” Morphis described of this course. “They have been family friends since the late eighties. I have had many memorable meals and experiences with the Chabaud family, and just wanted to honor them.”

This dish was deemed a favorite by guest Bill Norman, who owns Fainting Goat Spirits. This deconstructed “holy trinity” had the components separately presented, but the magic happened when you combined the flavors getting a little bit of everything. The toasted gorgonzola added a beautiful cheese straw like texture and flavor.

“Bacchus is another Krewe in New Orleans,” Morphis explained of this dish. “Bacchus was formed in order to include people from outside of New Orleans to revitalize carnival in NOLA. Duck gumbo is revitalizing and a very inclusive dish in itself.”

The gumbo has been a featured item in the past few weeks at Blue Denim, the warmth and spiciness is everything you love in a gumbo. It was a bit heartier thanks to the duck with a great kick of heat.

“Zulu is the first parade to roll on Fat Tuesday, which to me is the meat and potatoes of carnival season.”

A riff on shrimp and grits, brings us steak and grits. It was a hearty entree to cap the evening’s savory courses.

“Endymion is one of the super Krewes and largest parades that roll during Mardi Gras,” says Morphis, “When I lived in NOLA, the Chabaud family lived on the Endymion parade route. I had some sweet times there, so dessert was named for Endymion.” 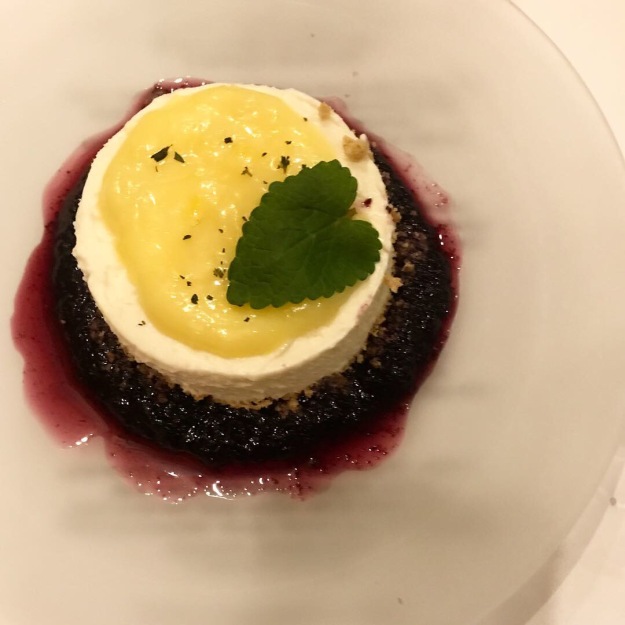 The dessert, with its golden, purple and green, which I’m sure was a hat tip to Mardi Gras, was sweet, tart and herbaceous. I absolutely love a lemon dessert with some component of berry. It was absolute perfection for me.

Morphis says when considering what the city needed, he saw a place in the market for great cajun cuisine. “I make a concerted effort to do it the right way and with the right ingredients. The bread for our Po’ Boys come from New Orleans.“

“We work closely with Gate City Harvest and get with Aubrey to find out what he’s growing and it’s getting easier to build our menus earlier now and utilize as much locally grown produce as possible.”  He adds, “I also love to read a whole lot and study cookbooks to see what other people are doing…and study what other cultures are doing too so that we might be able to do that here at Blue Denim.”

Morphis says he’s happy he has been able to discover a passion and deliver what he loves to do in Greensboro and now he has regulars that dine at Blue Denim that keeps the drive alive. “I don’t take loving what I do for granted. I knew I wasn’t going to get rich, but we make a nice living. We also found good people that work with us that share that desire to create a great experience for our guest. I don’t take that lightly.”

A look back at the last month of deliciousness in the High Country
5 INGREDIENT FRIDAY the ubiquitous Pastina. Soooo many ways to make it and it’s so popular all over right now. If you want to keep it to 5 ingredients you’ll need:
Taking our grits up an notch. Take your favorite finished white grits, add lots and lots of pepper and pecorino, some butter at the end and don’t forget the egg cause you’re fancy and living on the edge.
BRÛLÉED EGGS. Jammyish eggs + light dusting of sugar, salt. Torch it and enjoy this take on a kind of expensive snack 😆. Jk it’s only expensive if you snack on a dozen.
Have you ever started making the dinner and then you pivot and it becomes a completely different meal altogether (sorta kinda)? What started out as beef stew (but with Red Weapons from the #thiswillmakeittastegood cookbook by @chefandthef) was transformed with chili garlic sauce, sesame oil and coconut aminos into ramen and it hit the spot. Sometimes you don’t feel like mashed potatoes (well that’s rare lol) but…Sometimes you just for sure need noods. We used @bfrmeats beef stew meat, @sunshinecovefarm micro greens from @highcountryfoodhub
5 INGREDIENT Friday: Zuppa Toscana