Why did the chicken cross the road? To dive into Slappy sauce!

Why did YOU cross the road? To go get the Slappy’s chicken!

Slappy’s Chicken opened last week on Acadia Avenue in the former Acadia Grill location. Slappy’s is so brand new, that as I write this… it doesn’t even have a sign yet. It’s a hot chicken joint. But not Nashville hot. Slappy’s hot. And it is outstanding.

Owner Scott Brambleburg and his wife used to own a restaurant in Brevard before returning to Winston-Salem. She went into the wine business while he’s been doing stints at local restaurants…some of our faves, like Mary’s and Meridian. And he’s spent that time perfecting his recipe, which is a mixture of heat, spice and a touch of sweet. “I’ve been working on this recipe for several years now with the hopes of opening up a place,” he says.  Scott says he grew up eating chicken similar to this so his dream was to bring the amazing chicken to the Camel City. He says, “I just wanted a place where we basically just do one thing and do it well. And what we have here is a great set up because it’s like a food truck, but it’s an actual restaurant.”

Plus, it’s super quick. We had our food in front of us in less than 5 minutes. The chicken? It was seriously slap yo mama good. The sides were …they’re getting there.  I ordered the Chees-Its mac n cheese and the collards. The chicken is the star though.  A steady stream of customers kept coming through the door right up until closing. Brambleburg said traffic has been busy since opening last week. “It’s been awesome. And it’s mostly my friends coming in and then spreading the word on social media.” 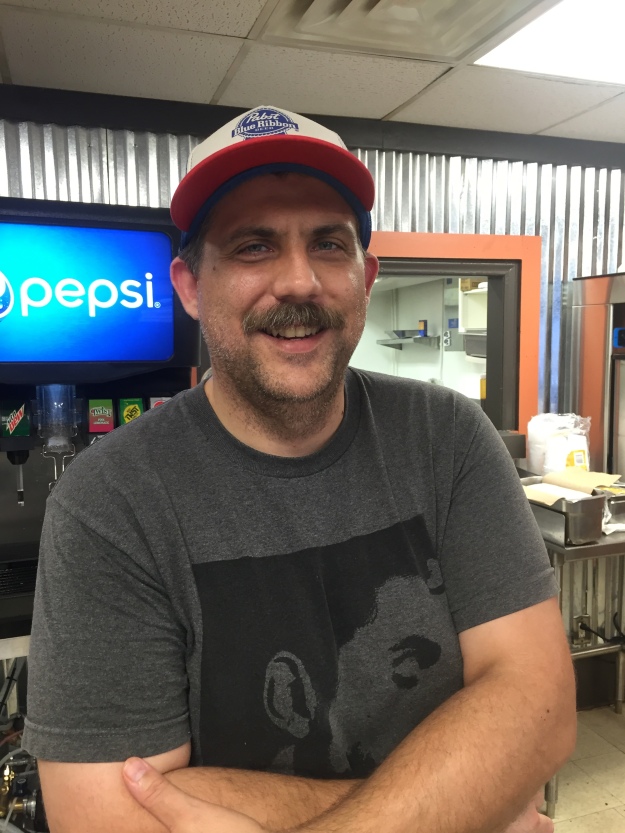 We expect the word to get out pretty quickly and this place may soon have a line out the door. It’s that kind of place. Just hole-in-the-wall enough yet so delicious.

So go check them out so you can say how you discovered them before they got so popular.

Props to Jordan Keiper of Tavern In Old Salem for the inspiration for the headline!

That new new @goodyearhouse. I’m in LOVE with the space, the outdoor seating, the vibe, the food. Definitely try the marinated shrimp, schnitzel Sammy, stacked wedge. All good. #noda #charlotte #eeeeeats #charlottefood #eatlocal
#triadfoodieschefstable @wine_merchants.wsnc @winemerchantsbistro. Four splendid courses had everyone raving. #eatlocal Course 1: @fair_share_farm salad with @vermontcreamery goat cheese, strawberries and candied pecans Course 2: Dirty South Oysters Rockefeller Course 3: @joycefarms fried chicken & caviar Course 4: Butcher’s Loaf & smashed potatoes. #triadfoodieschefstable
Finally got my hands on a lobster dog from @lobsterdogsfoodtruckasheville as they are in Boone for the first time. It is delicious. Chilled lobster but warm butter. It’s all meat and nothing funny like slaw or other troublesome things. They’re at @appalachianmountainbrewery TIL 9.
A take on takeout provided by @halfbakedharvest Orange Chicken. The kiddos loved this. Found the recipe in her Super Simple cookbook. #homemadetakeout #takeout #asiancuisine #orangechicken #imsomartha #eeeeeats
@louisianapurchasefoodandspirit is one of the most delightful culinary experiences in the High Country. Great things are coming this summer. Until then, the BBQ shrimp is waiting. #eatlocal #highcountry #blueridgemountains #bannerelknc #ncmountains #exploreboone
A bowl of roasted goodness on a dreary day. This kind of reminded me of an appetizer platter just dressed up a bit. Roasted purple sweet potato. Leftover roasted buffalo cauliflower. Roasted kale “chips” and 🥑 and some @traderjoes everything but the bagel Greek yogurt dip (easily sub the dip for tahini and it’s totally vegan. #buddhabowl #vegetarianrecipes #lunch #healthyfood #eeeeeats