This is an expanded and slightly more personalized story from today’s earlier blog post in YES! Weekly…

In what might be one of the most closely guarded secrets in recent months in Winston-Salem, The Honey Pot has finally announced who will be taking over the kitchen and we won’t keep you waiting like they did to the rest of us… 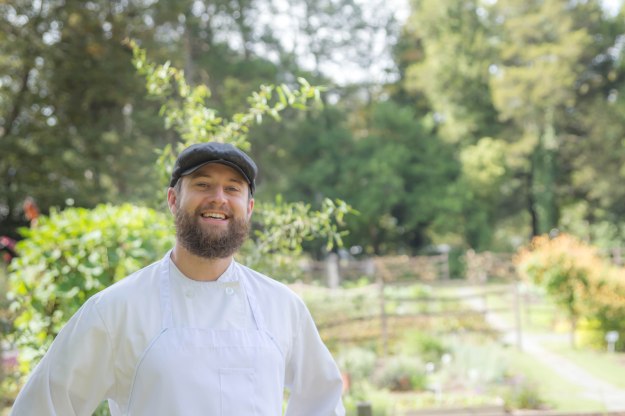 Harrison Littell has been welcomed as Executive Chef!  The suspense was killing some of us. But we are super duper excited because he’s totally awesome and nice and just flat out TALENTED!

Chef Littell is a Winston-Salem native and after a stint in the Northeast, has been executive chef at Five Loaves Catering.  He’s been getting around town a good bit with chef collaborations, like at Mission Pizza Napoletana’s Knife Fight among other things. And generally being on the scene with his wife, Andrea. They’re fabulous. I met them at Knife Fight and enjoyed dinner with them a couple of weeks later at a tasting to introduce The Katherine Brasserie at The Kimpton Cardinal in WS.  And I saw them again not long after at the Industry Crawfish Boil that you can read about here. 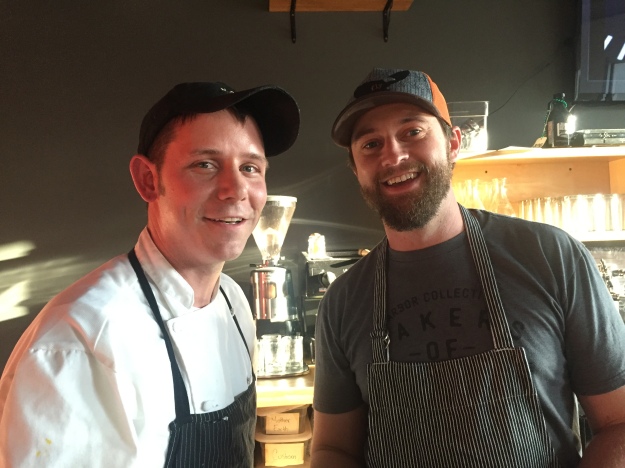 The Honey Pot announced via its Facebook page  that Littell’s connection with the local community of farmers and purveyors along with his time at acclaimed restaurants puts him in a unique position to lead The Honey Pot into its next phase, “As I’ve gotten to know Harrison over the past month or so, I’ve been really excited about how aligned we are in our philosophies on everything from sourcing to working with people. Not to mention he has an incredible palate and aesthetic,” announced Honey Pot GM, Beau Tate via his Facebook page.

Chef Littell told me earlier, “It’s going to be a great platform for me to get back to doing some food that’s close to my soul. They have a great reputation and following as well as a great staff. I’m super stoked to be working with Beau as well.”

Littell will start the 3rd week in July. “I’ll work for a couple weeks to get my feet wet and then we will go through a full menu change to celebrate the height of the summer! We plan on continuing the mission there and utilizing as much as we can locally. I’m fortunate to step into a kitchen that is working uniformly. Matt had done a great job there and I look forward to continuing the growth.”

Littell will fill the position being vacated by Matthew Pleasants who intends to travel and expand his culinary horizons. I can’t wait to go back to The Honey Pot to  see what chef does to the menu. If you’re curious about The Honey Pot, definitely go check them out. I did a review for YES! Weekly about a year ago. You can read it here.

Tate and Littell both say that we should expect to see some “really exciting news in the next few months including the new menu launch, some additional lighter snack fare, farm dinners, wine dinners and much more.”

You can get to know a little bit more about the Littells over at their blog TowniesWS. It’s a pretty great space about the happenings in the town of #WSNC. 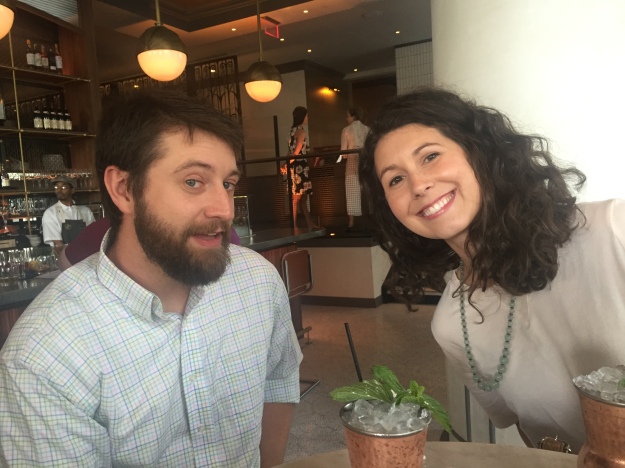 From TowniesWS…Chef Harrison and Andrea Littell

Another Nooooo Recipe with @bfrmeats and @corbettsproduce. I took their Shaved Pork, cut it in small pieces and mixed a little @cackalacky Secret Sauce + Corbett’s Peach Preserves. The Cackalacky sauce is tangy and spicy and the preserves added sweetness and thickened it a bit. Poured it over seared pork and let the sauce thicken. 15 minutes and done. We served this with roasted @ncsweetpotatoes and summer corn. We’ve so loved enjoying these easy meal collabs with @corbettsproduce. Check them out for such great produce, meat and sauces/rubs. We have another later this week!
Another “no recipe” post with @bfrmeats and @corbettsproduce. These ideas are all about getting dinner on the table quickly without a headache or remembering a recipe. This taco bake was perfect for #nationalquesoday.
A look back at our #triadfoodieschefstable featuring Chef Eric Brownlee at @katharinebrasserie. Multiple courses of French inspired cuisine with Southern and NC ingredients. The last photo as a menu. #eatlocal #nceats #wsnceats #bestofwinston #winstonsalemnc @thecardinalws
Oh I feel a touch of cool for sure today. Local brats, cabbage, onion , potatoes and apples in a sweet & spicy mustard sauce can kick off your Oktoberfest this weekend.
How can this not get a lovely ginger dressing? Fully local Asian salad. @highcountryfoodhub
NO RECIPE Recipe #2 on a dreary cooler Saturday with @bfrmeats and @corbettsproduce The goal? Easy protein plus sauce meals that come together with no thought and no recipe. This one I threw in the IP. I seared some pork kabobs/ stew meat, dumped almost the full jar of Corbett’s Hatch Green Chile Tamale Corn Salaa and cooked on high pressure for 35 minutes (but this isn’t a recipe mkay?) Add peppers or onions if you want. Use the pork however you wish. We made two pounds and it’s enough for 4 people to have tacos or bowls on the first night. We added beans and corn. At the end we dumped everything together (beans, corn, pork) with the rest of the salsa and called it chili verde. Perfect for #tacotuesday