When Miami Cafe closed its doors two and a half years ago on Old Salisbury Road in search of bigger digs, we all waited anxiously for the new location announcement, which came…and the opening (on Healy Drive) ….which never did. Problems, problems, problems….and if it was torture for you waiting, well it had to have been unimaginable for owners, Jose and Jacqueline Rodriguez and their daughter Tatiana Marquez. But a glorious light emerged at the end of that dark tunnel and late last year the Rodriguezes re-opened under a new name, Miami Restaurant & Bar.

Way back when Winston-Salem was in its quirky days, lived a restaurant called Rainbow News & Cafe….ah…the memories, right Mary Haglund? If you ate there, you know what we mean. And then after that, the restaurant was Christopher’s Global Cuisine. Certainly more upscale than Rainbow, but cozy and again with amazing food. For years the house stood silent and dark…beckoning curious restaurant owners and possibly scaring them off thanks to all the levels and corners and smallish parking lot. But it didn’t scare off the owners of this new, casual Cuban and Latin eatery. Somehow, Miami Restaurant & Bar is making it work. It feels like you are visiting someone’s house…kind of? But the quirkiness remains and is still quite comforting and familiar. You’d have to see it to know what I’m talking about. There’s still a transom etched with the its name, as well as Armand’s mural that will bring back memories of the Rainbow. You pretty much can’t leave without seeing your favorite childhood characters. 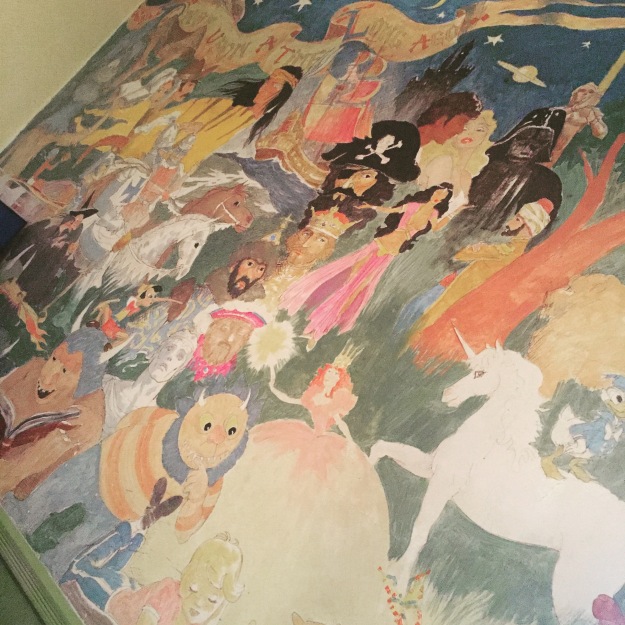 We’ve been to Miami Restaurant & Bar a few times now. Once at lunch for sandwiches and empanadas and another couple of times for dinner, just to get a good idea of what’s what. It’s improving each visit. The first time, I went with my friend, Christy, who frequented the old location. She’s from Miami and happens to be Cuban so she’s a great judge of the place. We went “halvsies” on our sandwiches. Don’t you love to do that? She got the Tripleta, a three meat sandwich on Cuban bread and I ordered a traditional Cuban with that awesome ham, cheese and pickles. We each got a side of the black beans, which was her suggestion and they were amazing. Slightly smokey and a bit spicy. The empanadas were crispy and hot filled with chunks os chicken and veggies with an avocado dipping sauce on the side.

Christy suggested that we order and share one of the their milkshakes, called Trigo. It’s a shake with milk and sweetened puffed wheat cereal. Think Kellogg’s Honey Smacks. You remember Dig’em? It’s like those in a milkshake. The first time I ordered it, it literally was like iced milk. Tasted good but wasn’t a milkshake. And Christy said it wasn’t the same as she had enjoyed previously. We were assured by Jose that he would talk to his team and correct the error. And the subsequent times we went back, the Trigo was just as milkshake-like as it should be. It’s definitely a must-try. On our second visit, mr. foodie got the mango smoothie while we waited (Trigo still wins), and for the table we shared empanadas, Ropa Vieja, pulled flank with onions and peppers in a tomato sauce. It’s served with rice and those incredible black beans. The Canoa was a hit. A bed of sweet plantains stuffed with picadillo, and mozzarella cheese. My last visit, I ordered picadillo with a side of plantains and I still prefer the Canoa. There’s just something about the savory meat mixture settling into those plantains that is so good. But ordering picadillo as the entree and choosing whatever side may be your preferred way to go. We highly recommend the Lechon Asado. It’s slow roasted pork in a delicious mojito sauce that’s been simmered with onions. You choose your side. It won the table in my opinion. I’m told to try Mofongo, from the menu, which features green plantain and garlic, pork rind in a chicken broth. Also, Shrimp Mofongo, which is supposed to be incredible, but for now it’s a feature only. 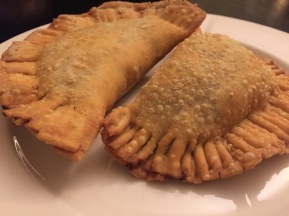 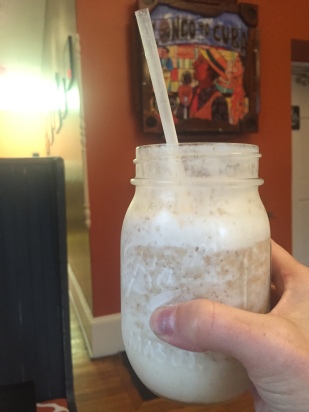 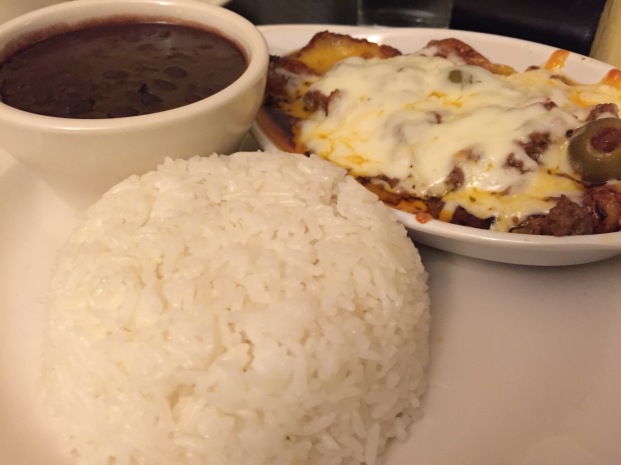 Service was a bit slow the first visit, but the food was piping hot and incredibly fresh. Service was more speedy the other times. We got to visit with Jose and he’s optimistic about the space and future business there. “It has been busy. We are just trying to get the kinks out, working on timing and training new staff.And that takes some time.” The restaurant just got its liquor license within the last 10 days or so. “We have beer and now wine. And we are adding more liquor and building a menu for our bar.” There’s a bit of porch seating if you want to enjoy the outdoors. But Jose says they are working on additional patio seating which will be ideal for the type of cuisine they serve. And he says he and his wife will decide how to best utilize the upstairs for private events or meetings. “Let’s get down here working, then we can focus on upstairs.” 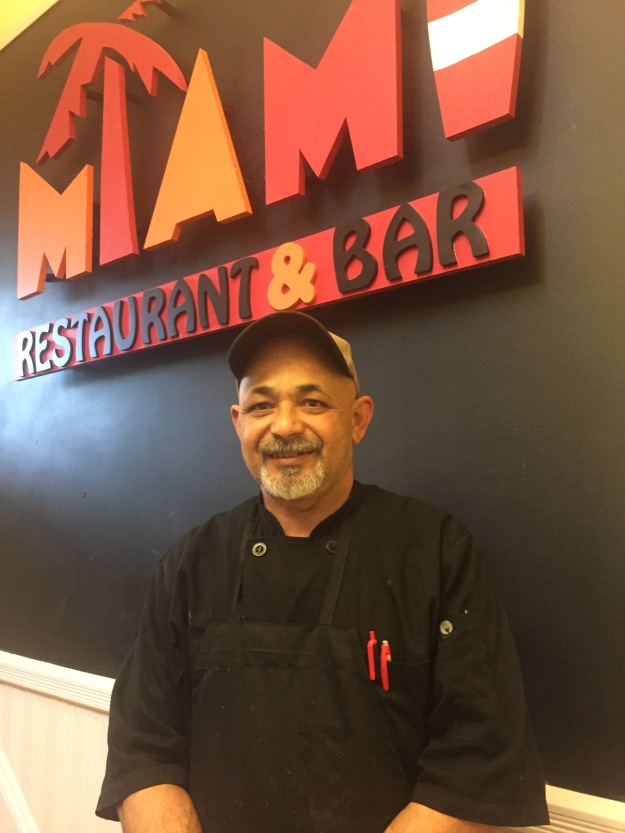 Only a few things remain…work out some of those pesky kinks, as Jose says, AND get that bar menu really going. As a Latin restaurant, I think it desperately needs cocktails and cerveza. I bet the Trigo would taste very good in “adult” version. One can hope that it is in consideration.

All in all, Winston-Salem needs Miami Restaurant & Bar as much as it needs Winston-Salem. Definitely worth a try.

What’s your favorite Latin restaurant in the area?

The cutiest new dessert spot and the dreamiest turtle cheesecake in #boonenc is at @venturechocolateandwine. We can’t wait until the wine bar is open to enjoy some charcuterie. Y’all need to check them out. #downtownboone #828isgreat @exploreboone @downtownboonenc
Not enough room in the pic for the extra inches of this tomahawk ribeye at @stonewallsrestaurantnc It’s a splurge but it is easily 3-4 meals if you include their wonderful salad bar. #bannerelknc #828isgreat #eatlocal #nchighcountry
I love a loaded up salad as much as anybody but at dinner or for a side, it’s simple simple that works for ease of getting it on the table. This is simply arugula from @newlifefarmnc, lots of lemon and lots of parm along with @batistinifarms extra virgin olive oil. Finish with pepper.
Nothing says summer like tomatoes and a fresh caprese salad with burrata. Butter lettuce and sun gold tomatoes from @honeytreefarmnc get creamy burrata and buttery sourdough breadcrumbs. I drizzled with @batistinifarms EVOO & balsamic. I could eat this literally every day of summer. Got the produce from @highcountryfoodhub.
Your easy pasta night starts with the fresh in the dairy section tortellini (this is @lowesfoods prosciutto and sausage), @moffitttoolanfamilyfarm ground pork (I seasoned with herbs) and jarred sauce. We made it a little more special with a turn of heavy cream and 1/4 cup of mascarpone. Decadent and super easy when you don’t feel like cooking but craving pasta. Top with parm & basil. And done!
Sure it might be summer but where we live it’s going to be 68° today and that’s practically fall for you lowlanders. Sausage gnocchi soup (with @bfrmeats beef Italian sausage) to nourish you and make you cozy inside. Recipe below: