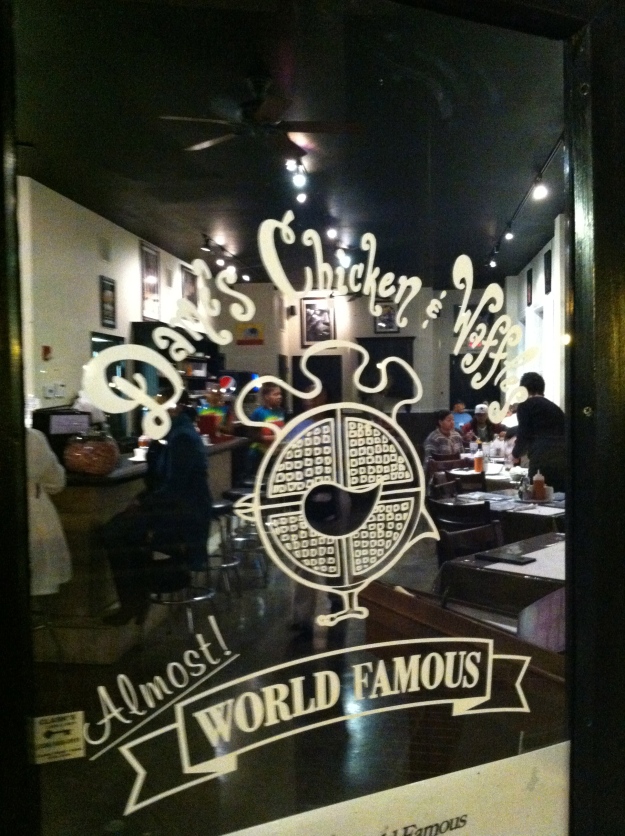 Lord, have mercy! That’s what we Southerners say when something tastes soooo good! Foodies, a few years ago on Food Network I watched a clip about a place that serves Fried Chicken and waffles. Then a couple of years ago, the foodies went to Las Vegas and I got a very fancy version of them with all kinds of adornments. I was thrilled beyond belief when I found out a chicken and waffles cafe was being opened in Downtown Greensboro. What is Chicken & Waffles? Well it’s lore and legend and some goooood eaten’! Dame’s Chicken & Waffles has had a successful restaurant in Raleigh for a few years and now has enjoyed being downtown’s “newest landmark” in the lovely corner of Southside on MLK, Jr. Drive. 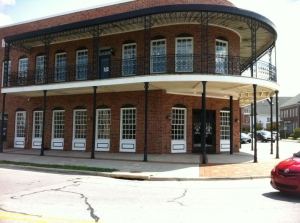 It’s a lovely, cozy place with dark ceilings and white walls adorned with jazz art. It makes me think of New Orleans a little bit, although Chicken & Waffles became a delicacy in Harlem. There, it became a favorite of the late night crowd. I can see why….maybe after a night of working or dancing, you don’t want breakfast but something in between that and a late night snack. Dame’s intention is to capture the Harlem Renaissance. And the vibe is definitely there. And it’s catching on. We were there on a Friday night recently and we got there before it started to really fill up. By the time we left, most tables were full. We’d been ice skating (sort of?) so we’d built up an appetite, as trying to balance on slippery ice for 2 hours does. We were ready for a nice, solid meal and what Dame’s had to offer which is….Chicken. All kinds–fried, grilled, panko-crusted. And waffles. All kinds–original, sweet potato, blueberry, gingerbread and VEGAN (!!) etc. Then they add homemade “shmears” which are flavored infused creme butters ranging from Vanilla Almond to Maple Pecan to Peach & Apricot Cream, just to name a few. The chicken is cooked perfectly and not greasy (some old school connessieurs might say that’s a bad thing, lol) and sitting on top of the most crispy, yet fluffy and lightly sweet waffle. It’s like you’ve died and gone to Heaven, where they play jazz and blues and swing.  I had A Quilted Buttercup.. a fried chicken cutlet sandwiched between two petite sweet potato waffles with the Maple & candied pecan shmear.  Giant. Not petite. 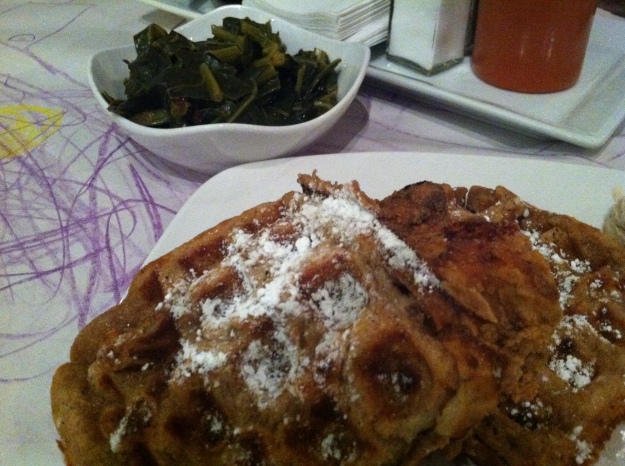 Mr. Foodie ordered “What A Classy Hen”, which is basically the Classic chicken (a cutlet) and Classic waffle with Vanilla and Almond shmear. 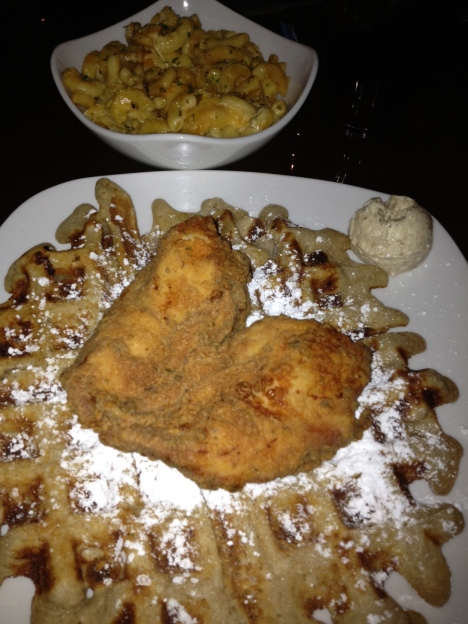 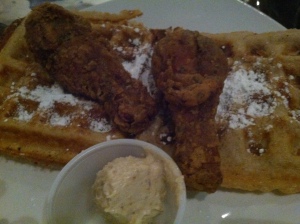 I got spicy Mean Greens for my side and Mr. got mac-n-cheese and the kidlets got a petite waffle each with a drumstick. Really you can get a great waffle and chicken combo on their menu and if you lean towards fruity, they got it and if you like savory or spicy, they got those too!  If waffles aren’t your thing, they have grits, all kinds of grits. Grits with shrimp, grits with sausage.  Go all out and get The Barnyard Honcho, which a patron at the table next to us got. I overheard him say “surprise me,” so he had a full plate of fried chicken cutlet, classic waffle, eggs and creamy buttered grits. Breakfast for dinner, anyone? If you think you need to stay on that crazy health kick on the night you go get chicken and waffles then by all means, you COULD order a salad.  Oh and they have dessert too, but I cannot for the life of me figure how you’d have room for it. You could IF you got the salad. Ha! When you try dessert, please leave a reply about it in the comments and I’ll post an “update.” 🙂

You’ll also find some benedicts and wings and many a la carte items to customize your experience.  And if you like beer with your combo, they do offer a modest selection of Triangle-based beers on draft (and a few domestics by the bottle) but we go LOCAL here, foodies!

Next time you need to connect with your soul a little bit, get some fried chicken with a waffle at Dame’s. Get a shmear and then take the tiniest bit of hot sauce, splash a few drops on your chicken, drizzle a little bit of maple syrup on the chicken and let some of it soak into that waffle (with some more shmear). Foodies, that is HOW IT IS DONE at Dame’s Chicken and Almost World Famous Waffles and you will be full and happy when you leave. One of triadfoodies’ best!

BRÛLÉED EGGS. Jammyish eggs + light dusting of sugar, salt. Torch it and enjoy this take on a kind of expensive snack 😆. Jk it’s only expensive if you snack on a dozen.
Have you ever started making the dinner and then you pivot and it becomes a completely different meal altogether (sorta kinda)? What started out as beef stew (but with Red Weapons from the #thiswillmakeittastegood cookbook by @chefandthef) was transformed with chili garlic sauce, sesame oil and coconut aminos into ramen and it hit the spot. Sometimes you don’t feel like mashed potatoes (well that’s rare lol) but…Sometimes you just for sure need noods. We used @bfrmeats beef stew meat, @sunshinecovefarm micro greens from @highcountryfoodhub
5 INGREDIENT Friday: Zuppa Toscana
Unboxing yesterday and today it’s dinner because we didn’t get home until 6:00 and we were too tired to go anywhere. @batistinifarms and @midssauce to the rescue (along with some Italian sausage) dinner in about 30 minutes.
Let’s do a lil taste tour of some yummies from the one and only @cobosushi in Boone.
This chicken soup is the best. Inspo by @ambitiouskitchen if you try it, you’ll know why. You’ll feel it in your soul. A family favorite. Recipe at the link in my profile.