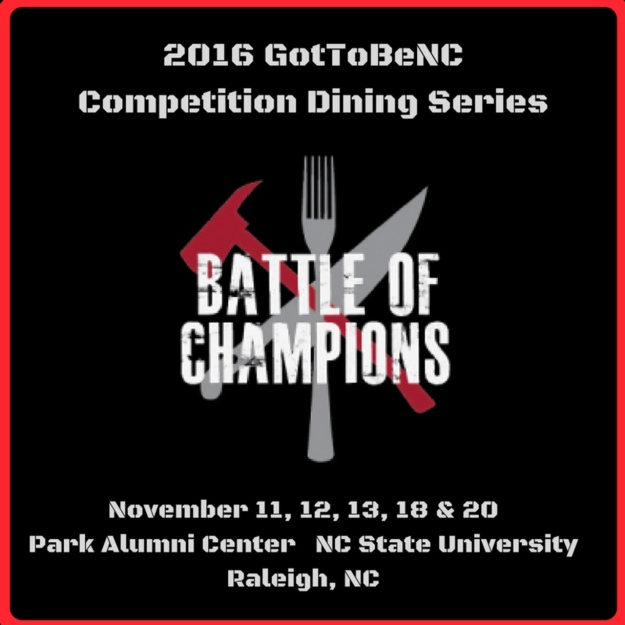 Foodies, you know I ain’t shy about how much I love Got To Be NC Competition Dining. The Battle of The Champions takes place in mid-November and tickets are on sale now! It’s a foodie lovers dream..five nights of the state’s best, battling it out for the ultimate prize of Best in the State.

For information and tickets, click here. You can choose the dinner you want, if tickets are still available that is…

Representing us locally is Chef James Patterson and team Culinary Crushers from Sedgefield Country Club in Greensboro. They take on Team Egg Heads from Another Broken Egg Cafe in Durham.

Their prelim battle is November 11. You can get tickets for that round here. 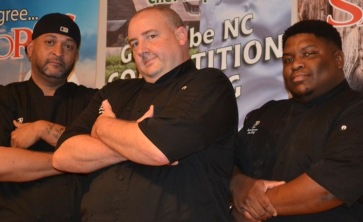 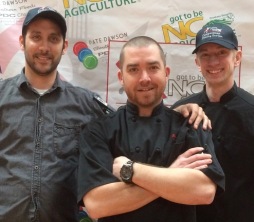 Here’s the rest of the lineup….

Competing in the second preliminary round of the 2016 Battle of Champions series   Saturday, November 12, 2016

Competing in the first semi-final round of the 2016 Battle of Champions series  Sunday, November 13, 2016

Grab a loved one and your friends to pull for your favorite. You’ll walk away completely full and impressed and loving what these chefs do with local, seasonal ingredients. It’s a blast. It’s a locavore’s dream and the fellowship over food…it’s kind of indescribable.  We hope we see you!

Here’s the latest from our friends at the Got To Be NC Competition Dining Competition with schedule details for all the cities plus a link to PRE-SALE tickets!  The chefs are building their teams and we should know soon who’s on the Dream Teams. There will be teams this year in Winston-Salem AND in Greensboro, along with Raleigh, Durham, Charlotte and Wilmington and the winners of those cities will go to the battle of champions in the fall. And guess what? Once again, this year, I’ll be in WS and GSO for all the action so be sure to follow along at @compdiningnc on Twitter for photos and descriptions as well as chatter!  Below is a photo of last year’s winners. Winston-Salem’s own, Chef Richard Miller, of Graze, was our local winner and  Chef Ryan Conklin (second to left) of Rex Healthcare was state champ (that’s right…a HOSPITAL chef won…but Chef Ryan is no ordinary hospital chef.) Tickets are on sale beginning in April for the Durham event. Be sure to check out their webpage for PRE-SALE tickets . Many events sell out, so you might want to get a jump on it before tickets go on sale for the masses.

The Got to Be NC Competition Dining Series, a single-elimination tournament highlighting the best of the state’s food, agriculture and culinary talent, is back for 2016 with a total of eight tournaments across the state, each made up of four chef teams vying for the local title. The touring competition will have dual brackets in both Raleigh and Charlotte, and one tournament in each of Durham, Winston-Salem, Greensboro and Wilmington. It all culminates in October with the Battle of Champions to name a statewide victor.

Applications for chefs interested in competing are currently being accepted for all locations. This year, the Got to Be NC Competition Dining Series is switching formats to allow chefs to create All-Star Dream Teams. The change allows chefs from different restaurants to partner together to create their three-person team, upping the potential caliber and creating a more fun and competitive atmosphere for all.

“We’re excited to introduce this new Dream Team concept that will further showcase the immense culinary talent and agriculture in North Carolina with the 2016 Got to Be NC Competition Dining Series,” said Jimmy Crippen, Competition Dining Series founder and host. “Our mission is to connect and celebrate with foodies across the state through this dynamic, entertaining culinary experience. We look forward to sharing unique chef collaborations with our diners to make for an unprecedented year of highly competitive events with innovative dishes like never before.”

Got to Be NC Competition Dining Series battles include two chef teams each preparing three courses centered on a featured ingredient that comes from a North Carolina farmer or artisan producer. Featured ingredients are revealed to the chefs the morning of the dinner event and must be used in every course. Ticketed guests get in on the action, savoring the full-service, six-course meals without knowing which chef prepared which plate. Alongside culinary and guest judges, diners rate each dish using an interactive app, ultimately determining who moves on to the next round and who goes home.

The 2016 Got to Be NC Competition Dining Series dinner battles will be held in:

The six winners will move on to compete in the Battle of Champions at the end of the year. Since Raleigh and Charlotte teams must compete in an extra battle to win their local title, these chefs will receive a bye for the first round of the championship.

Tickets to attend an interactive dinner battle are $59 to $69 each and will officially go on sale for each series once that local bracket is announced. Discounted pre-sale tickets for all tournaments are available now for $10 less than standard pricing at http://www.competitiondining.com. Tickets are expected to sell out quickly, and people interested in attending are encouraged to signup for the Got to Be NC Competition Dining Series e-newsletter for the most recent ticket updates and news.

All chefs are invited to apply to compete in any of the six tournaments. The application and a complete list of rules are available at www.competitiondining.com/compete.

The Got to Be NC Competition Dining Series is sponsored by the NC Department of Agriculture & Consumer Services, Pate Dawson-Southern Foods,Certified Angus Beef®, and local and regional partners throughout the state. The goal of the series is to celebrate North Carolina products and agriculture, and to showcase the culinary ingenuity and talent across the state. For more information, visit http://www.competitiondining.com or get in on the conversation at www.facebook.com/competitiondining and @CompDiningNC on Twitter or Instagram.

5 INGREDIENT FRIDAY the ubiquitous Pastina. Soooo many ways to make it and it’s so popular all over right now. If you want to keep it to 5 ingredients you’ll need:
Taking our grits up an notch. Take your favorite finished white grits, add lots and lots of pepper and pecorino, some butter at the end and don’t forget the egg cause you’re fancy and living on the edge.
BRÛLÉED EGGS. Jammyish eggs + light dusting of sugar, salt. Torch it and enjoy this take on a kind of expensive snack 😆. Jk it’s only expensive if you snack on a dozen.
Have you ever started making the dinner and then you pivot and it becomes a completely different meal altogether (sorta kinda)? What started out as beef stew (but with Red Weapons from the #thiswillmakeittastegood cookbook by @chefandthef) was transformed with chili garlic sauce, sesame oil and coconut aminos into ramen and it hit the spot. Sometimes you don’t feel like mashed potatoes (well that’s rare lol) but…Sometimes you just for sure need noods. We used @bfrmeats beef stew meat, @sunshinecovefarm micro greens from @highcountryfoodhub
5 INGREDIENT Friday: Zuppa Toscana
Unboxing yesterday and today it’s dinner because we didn’t get home until 6:00 and we were too tired to go anywhere. @batistinifarms and @midssauce to the rescue (along with some Italian sausage) dinner in about 30 minutes.