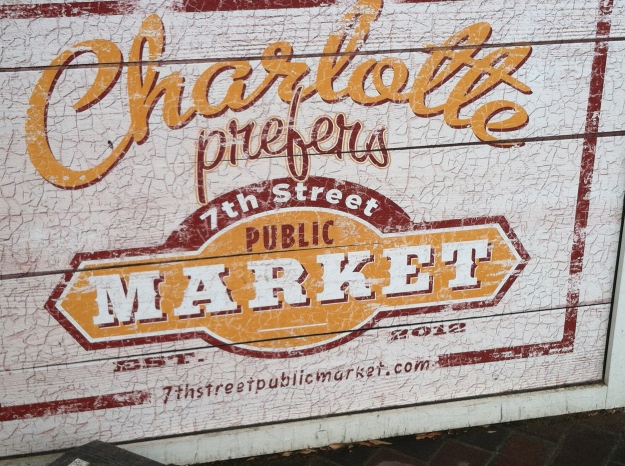 Occasionally during summer break, the fam gets the privilege of joining the Mr. on biz trips. That was just the case a couple of weeks ago when he had plans to travel through SC, including Columbia and Charleston. Considering Charleston is one of my favorite places in the world, this was considered a real treat. Of course, it’s just another opportunity to share our adventures with our foodies.

First stop, lunchtime in Columbia, SC. I’d heard Bluefin in the Village at Sandhill was great, but the price point for a family of four at lunch was higher than I wanted and the neighboring restaurant Al-Amir just sounded so darn good, that we decided to eat there. My kidlets like flatbread and if nothing else, they’d eat that and hopefully some chicken. We got comfy and ordered Falafel, Damascus Bread, Hummus and a selection of kabobs featuring chicken and lamb. Check out the pics! 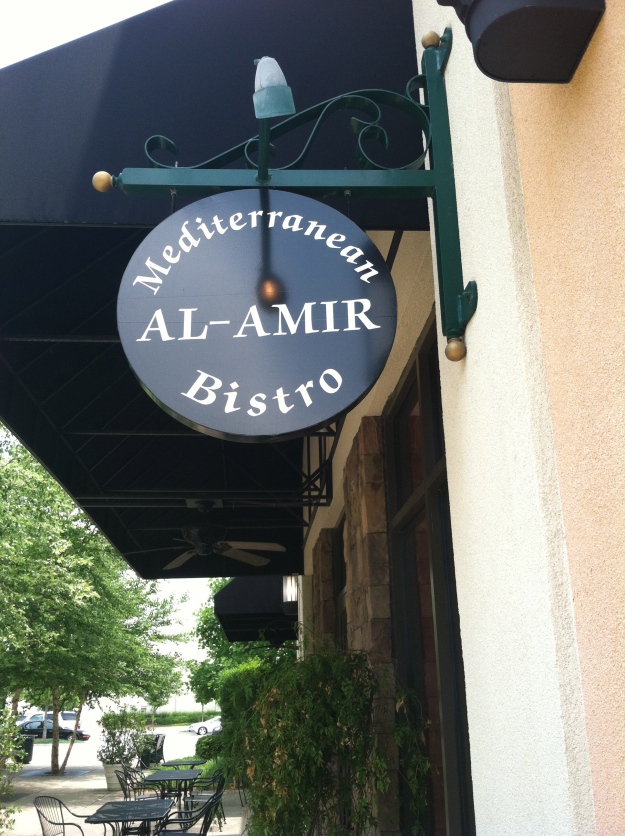 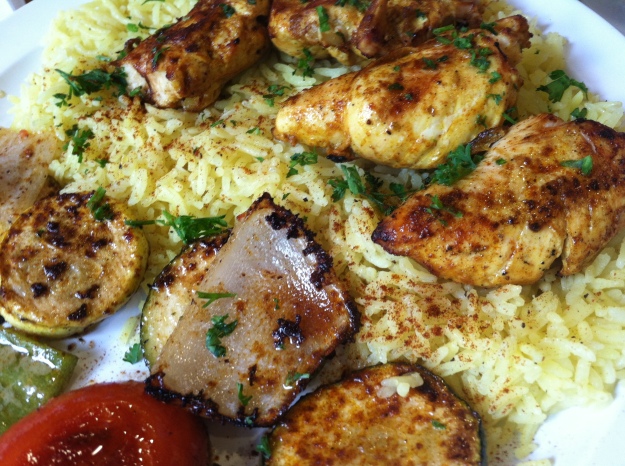 This food hit the SPOT! I mean seriously, delicious, all of it. The salad was fresh and crispy with that deliciously tangy Mediterranean style dressing, the Damascus bread (we ordered large) was huge and had wonderful texture with the toasted white and black sesame seeds. I could’ve eaten a plate of falafel myself. And the kabobs were awesome. Oh and the hummus was smooth and creamy and delightful. Mr. foodie then went on sales calls and we did a little walking around the shopping center until he returned. When he did, it was off to Charleston, baby!

Did I mention I LOVE LOVE LOVE Charleston? It’s where Mr. foodie and I honeymooned. We’ve been back a couple of times since then. It’s pretty much the place I became a “foodie” and the food scene just keeps getting better.

We couldn’t get into Husk even though it was pouring down rain from the beginnings of Tropical Storm Andrea. There was about a 90 minute wait. So we walked next door to Poogan’s Porch. The place is pretty much legendary and probably not quite as touristy as some other spots in the area. 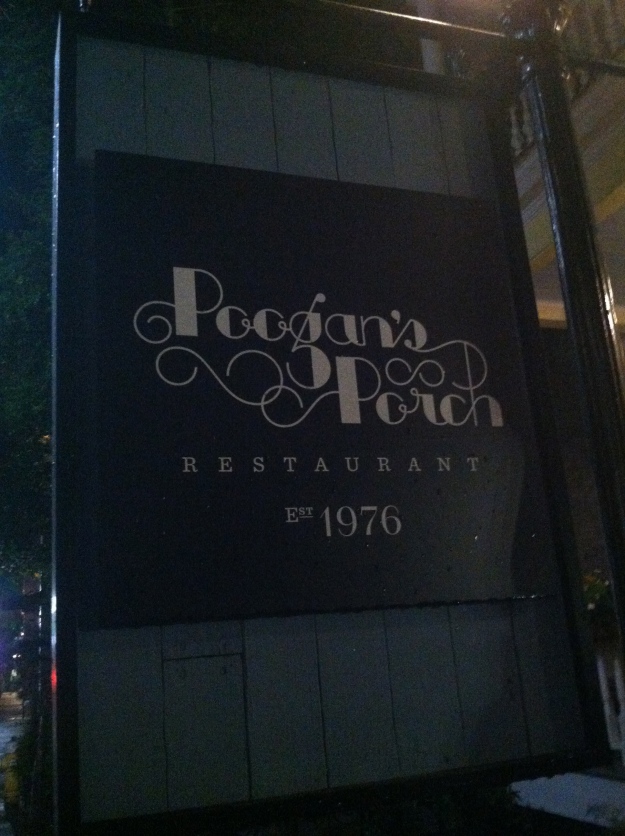 We were seated very quickly, ordered some cocktails and Pimento Cheese fritters and She Crab Soup. It sounded good and warm since we were dripping wet. Because we took a Rickshaw to dinner. In the pouring rain. Not smart…life lessons, foodies! Anyway, they also brought out these most delicious, fluffy incredible biscuits ever. Awesome.

The fritters were crispy and cheesy and so was very satisfying. For entrees, Mr. foodie ordered the Crispy Skinned Snapper  with cheddar grit cake, pulled pork, local radish, wilted arugula, finished with NC bbq reduction. This dish was amazing. It won the table. 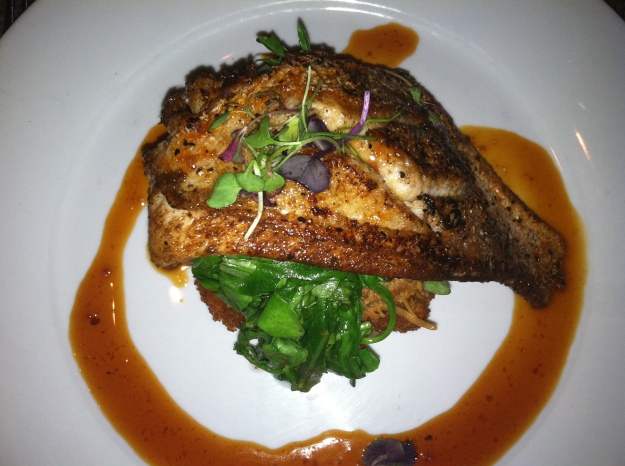 I ordered the Pan Seared Scallops. They were fresh and lovely and were served with a smoked bacon risotto cake, citrus scented spinach, tomato & green onion buerre blanc. Yummy and not too heavy.

The kids got mac and cheese and a grilled cheese. Something got eaten and something didn’t really. That has nothing to do with the food but more with the kids. And since it was raining so hard and we didn’t feel like it would be a good idea to go searching for dessert in the rain, we opted for a couple of the offerings on Poogan’s dessert menu. Are we glad we did. This beauty is the Chocolate Pecan Pie. With Buttermilk Smoked Bacon Ice Cream. Yes indeedy. Roll your eyes amazing. The pic doesn’t do it justice one bit.

The kidlets wanted banana pudding. This was pretty much a standard banana pudding except it had sugar cookies crumbles instead of the vanilla wafers I’m used to. I think that’s what the kiddos were missing because Mr. foodie ended up eating most of it.

For lunch the next day, Travis Myers, chef at River Birch Lodge in Winston-Salem said I just HAD TO check out Butcher & Bee on King Street. This is a tucked away little joint that has farm to table goodness and stays open late for the culinary workforce in the area. A place for chefs! I’m there. It’s a very cool industrial place with remnants and this crazy hive. The scene comes with great fresh sandwiches and pop up dinners. Definitely a must try if you are there. 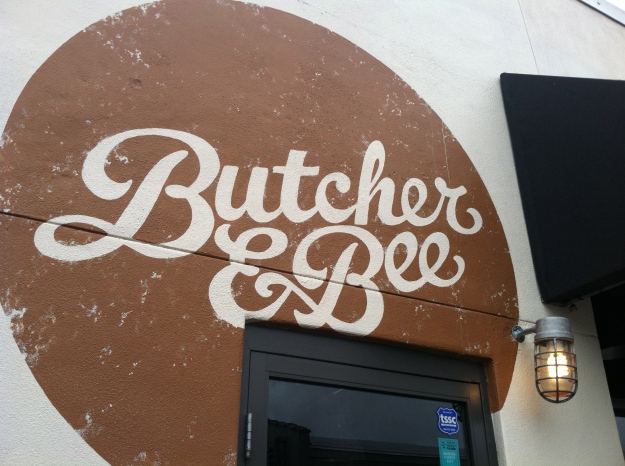 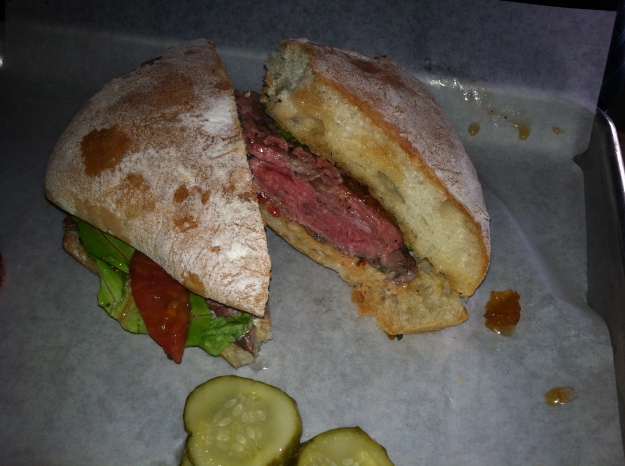 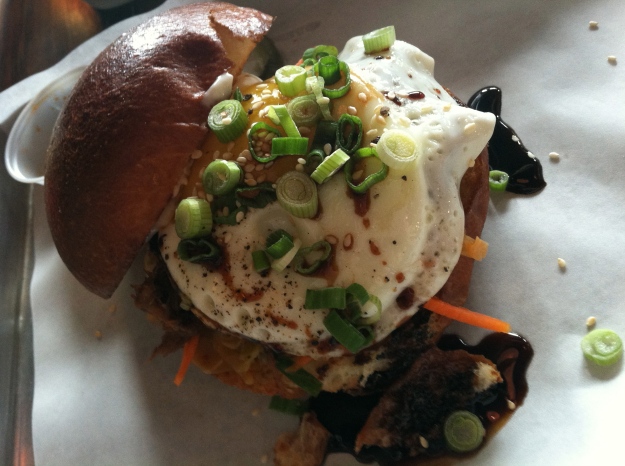 Then it was time to say goodbye to rain soaked Charleston. We were supposed to drive up the coast to Wilmington, but the tropical storm thwarted those plans so we decided to travel more inland to Charlotte.  Dinner was at Zen Asian Fusion. What was it fused with? Spanish. Wild, right?

We stuck with the traditional: Edamame, Hibachi for the eldest and sushi. Oh and the wee boy got spaghetti. Something for everyone, hooray! There was also live music and everything was very enjoyable. 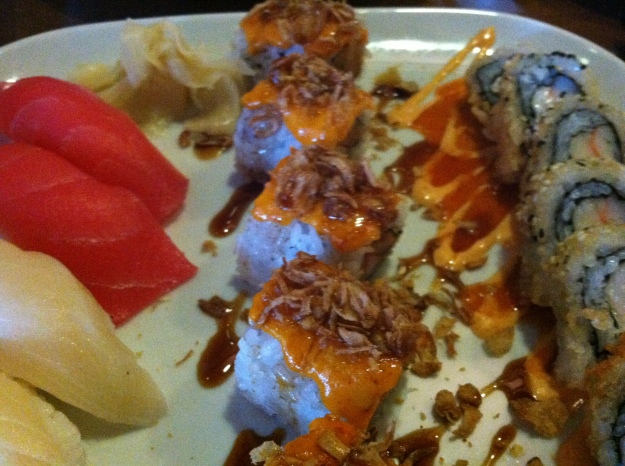 And finally, my fellow blogger in Charlotte, Fervent Foodie, suggested a great family friendly place…7th Street Public Market. This is like a tiny little version (way tinier) of the famous Pike Place Market in Seattle. It has various vendors offering sandwiches, pizza, sushi, coffee, confections, cupcakes, wine, beer, etc. plus it’s a real market where you can buy veggies, spices, salts, meat and all things local. Like Disney World for me. 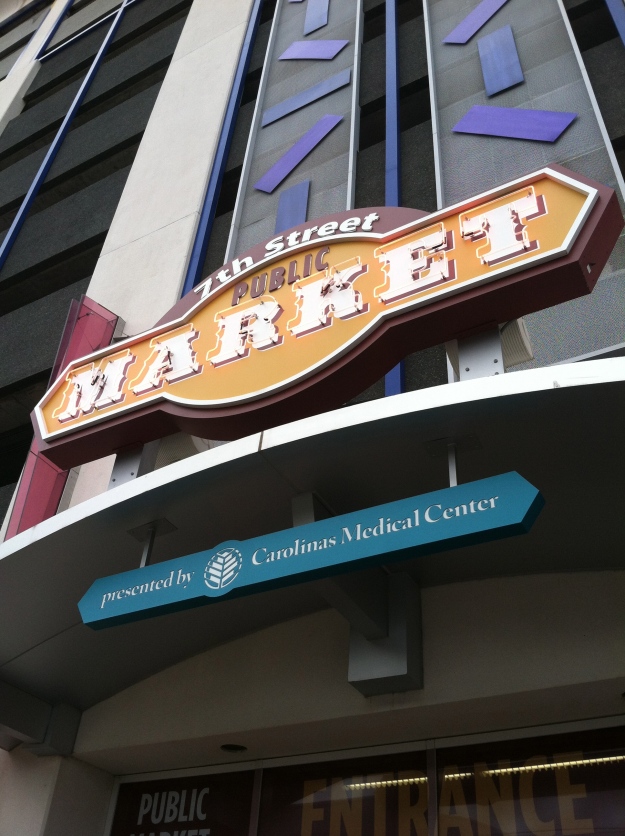 I ordered a pizza from Pure Pizza and a grilled cheese on focaccia for the kidlets and Mr. foodie ordered a sandwich from Local Loaf. The pizza was amazing. A little spicy and so very fresh. Mr. foodie’s sandwich was killer. He got the Hot Steak with horseradish garlic aioli, red onion jam, melted aged white cheddar, cress microgreens served on a fresh crusty Baguette. Mmmm!

Check out 7th Street Market’s link for a list of their vendors and what makes them so unique as a public market. Truly, it’s a place worth visiting. After a little walk around uptown and a brief ride on the light rail, we headed home to sunny skies and lots to blog about!

What are some of your favorite local places to eat in Columbia, Charleston and Charlotte?

The cutiest new dessert spot and the dreamiest turtle cheesecake in #boonenc is at @venturechocolateandwine. We can’t wait until the wine bar is open to enjoy some charcuterie. Y’all need to check them out. #downtownboone #828isgreat @exploreboone @downtownboonenc
Not enough room in the pic for the extra inches of this tomahawk ribeye at @stonewallsrestaurantnc It’s a splurge but it is easily 3-4 meals if you include their wonderful salad bar. #bannerelknc #828isgreat #eatlocal #nchighcountry
I love a loaded up salad as much as anybody but at dinner or for a side, it’s simple simple that works for ease of getting it on the table. This is simply arugula from @newlifefarmnc, lots of lemon and lots of parm along with @batistinifarms extra virgin olive oil. Finish with pepper.
Nothing says summer like tomatoes and a fresh caprese salad with burrata. Butter lettuce and sun gold tomatoes from @honeytreefarmnc get creamy burrata and buttery sourdough breadcrumbs. I drizzled with @batistinifarms EVOO & balsamic. I could eat this literally every day of summer. Got the produce from @highcountryfoodhub.
Your easy pasta night starts with the fresh in the dairy section tortellini (this is @lowesfoods prosciutto and sausage), @moffitttoolanfamilyfarm ground pork (I seasoned with herbs) and jarred sauce. We made it a little more special with a turn of heavy cream and 1/4 cup of mascarpone. Decadent and super easy when you don’t feel like cooking but craving pasta. Top with parm & basil. And done!
Sure it might be summer but where we live it’s going to be 68° today and that’s practically fall for you lowlanders. Sausage gnocchi soup (with @bfrmeats beef Italian sausage) to nourish you and make you cozy inside. Recipe below: