Noun: An act of slaughtering an animal or person or surrendering a possession as an offering to God or to a divine or supernatural figure
(attributed to Google Definitions)
Okay, well a sacrifice didn’t exactly happen. We did bless the food to the nourishment of our bodies and thanked God for all of his blessings. This little lamb hopefully had a pleasant existence, but in this recipe that Mr. foodie provided for us, the lamb had a MOST glorifying end result. Here’s step by step and recipe for what triadfoodies started to call “Seared Meat on a Nest.” But since it’s not actually served on the nest, we renamed it Basted Aromatic Steak.
We took about a pound of lamb sirloin steaks (from The Chop Shop Butchery in Asheville). They suggested marinating the meat in a “paste” of olive oil and fresh herbs, so we grabbed a few handfuls from our garden.

And we chopped it all up, along with some garlic and made a paste with some salt and olive oil. 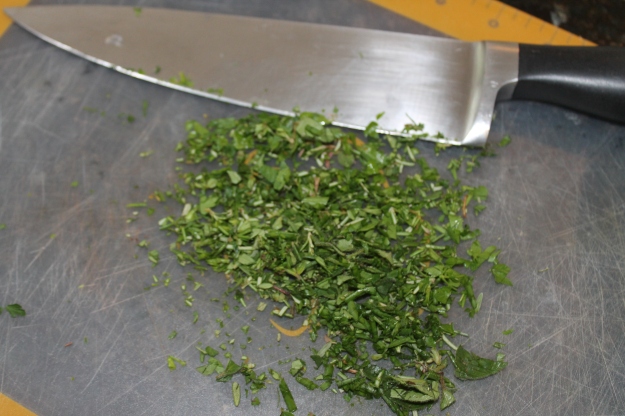 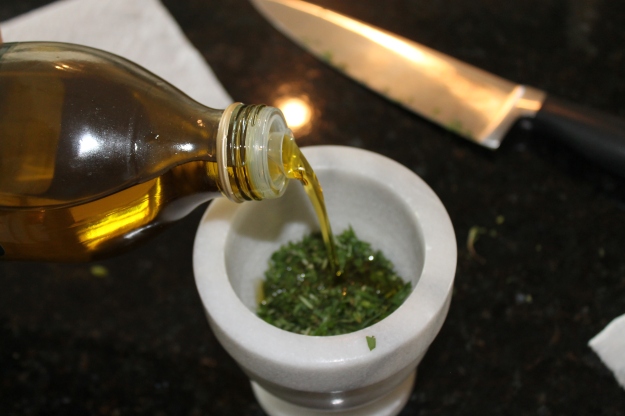 We used a mortar and pestle but I’m sure you can just use a small bowl and the back of a
spoon. 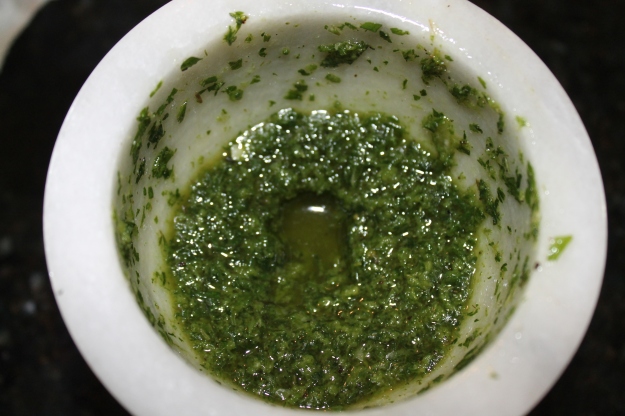 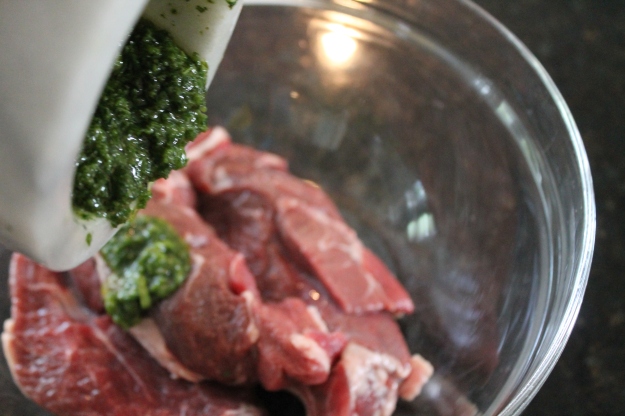 And then we poured that thick herby paste all over the lamb steaks, just rubbed it in, covered it with plastic wrap and refrigerated for a couple of hours. 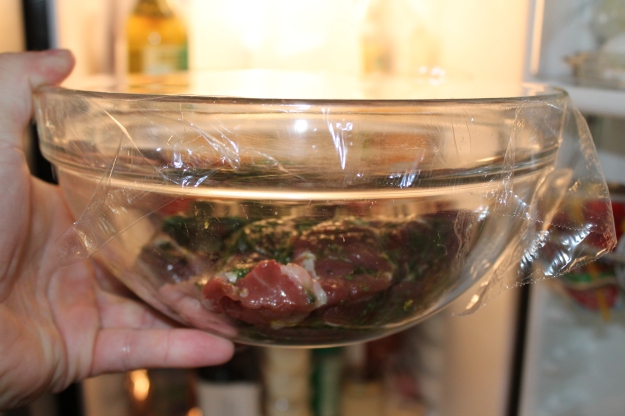 Going in for a chilly marinade

We took the meat out about 30 minutes prior to cooking, just to get the chill off. We heated our pan until very hot then laid them in for a quick sear on both sides. These were thick so we actually seared 3 sides. 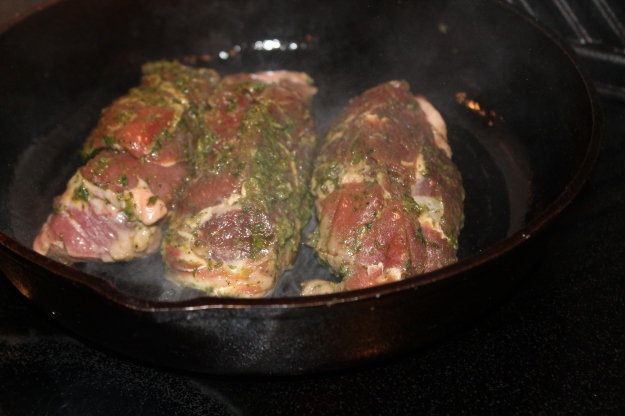 Once seared, we removed from the heat, laid down “nest” of herbs (in this case, rosemary) then placed the meat back on top of the herbs along with a big knob of butter (close to 3 tablespoons). 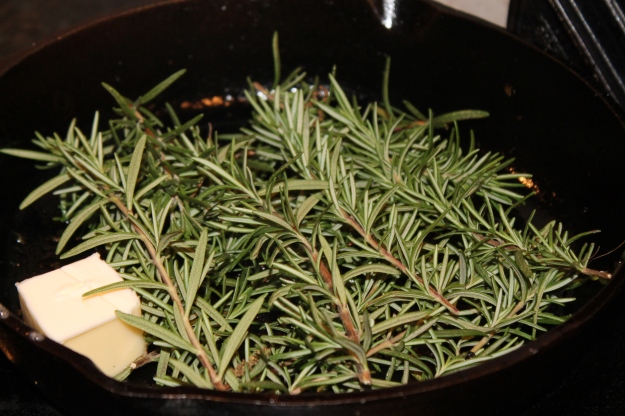 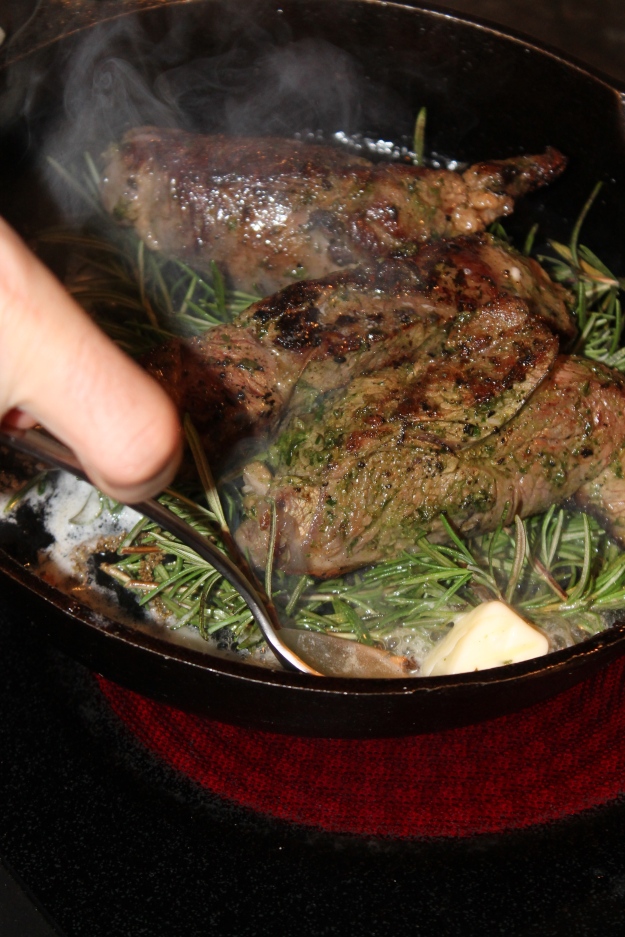 Tilt the pan slightly and begin ladling the butter all over the meat. It’s going to just help it along in the cooking process and impart lots of flavor. Since the meat is on the nest of herbs, it shouldn’t sear further.

He just kept ladling and ladling until the butter got a little darker in color….

Once the butter is all melted and nearly gone, place the pan in a 350-degree oven for about 6-8 minutes. Now you can clean up or make mashed potatoes or quinoa or have a glass of wine. It’s your time.

The lamb should be about medium, but cook it however long you need to. This lamb was the perfect cook time for us. Allow the meat to rest for at least 5 minutes.

We served this lamb on a bed of tricolor quinoa infused with currants, lemon thyme and chives (no recipe for that, just cook quinoa as the package recommends and add whatever ingredients you want) and we roasted asparagus alongside the meat as it cooked and rested.

The result was a beautifully herby and buttery lamb steak with a crispy seared outside and a juicy, flavorful inside. Most restaurants will charge you over $25 for this. I’d have paid for it and enjoyed it, no problem. Going out to eat is not in everybody’s budget and this kind of recipe allows you to experiment with beautiful cut of meat and hopefully support a local farm…in this case the lamb came from Mountain Memories Farm in VA via The Chop Shop Butchery in Asheville. Herbs couldn’t get any more local. They were from our garden 🙂
Here’s the actual recipe and ingredient list:

drizzle of olive oil (enough to make it a paste, approximately 1 1/2 tbs)

Set your steaks out about 30 minutes prior to cooking. Preheat oven to 350-degrees. On the stove, allow an oven safe pan to get searing hot. If your meat is very lean, you may want to coat the pan with a little oil. Sear both sides of the meat until browned well. Remove steaks from pan. Place fresh herbs in the pan then return meat to the pan on TOP of the herbs. Add the knob of butter on the side of the meat and herbs. Tilt the pan slightly and begin ladling the melting butter all over the steaks. Keep basting the meat until the butter gets a beautiful caramel color. Then place the pan in the oven and cook the meat until your preferred doneness. Allow the meat to rest before serving.

We know you can’t always get your lamb from a butcher shop like The Chop Shop Butchery. So click here for a highly recommended local farm with great lamb.

RAMEN KIT @via @_eightpointfive_ and @highcountryfoodhub and it’s everything you hope it’ll be. It’s never too warm for ramen and this Tonkotsu Ramen is a breeze to put together. Simply heat the broth, pork belly and pour over the fresh noodles and add the brined egg and included toppings. Ingredients for the ramen sourced locally. This is a single serving I picked up this week but on the hub this week is “ramen for two”.
#triadfoodieschefstable is back! Tastes of @meridianrestaurant with Chef Mark Grohman. Sold out event, 36 happy diners ready to start living again. Thank you, Chef and team for the outstanding food and impeccable service. Thank you to our guests for supporting our local restaurants. The courses: 👇🏻
#tacotuesday at @eltacorriendo. Finally! I’m hardly ever in Boone on a Tuesday and I always seem to miss the truck. But not today. Perfectly timed, 2 🌮 for $4.50 and definitely the best I’ve had from a food truck and up there in top 3 of tacos I’ve had. Meat is tender, corn tortillas keep their shape. Excellent salsa to brighten the flavors. Top is pastor. Bottom is cabeza. #triadfoodiesapproved #828isgreat #boonenc #tacotruck @exploreboone #exploreboone #appstateeats #booneeats #blueridgemountains
This Bang Bang Cauliflower & Broccoli might be the first thing that gets eaten up at the table. Inspo by @grilledcheesesocial and it’s super easy. Roast 20 min then toss in a bang bang sauce of mayo, sweet chili Thai sauce & sriracha. (Head to GCS feed for the reel). I topped with sesame seeds. These would make a great taco filling too. Try it!
Aperol spritz in the ☀️.
It’s #nationalroséday and even though it’s not looking like hanging out on the deck ☀️ for us, that shouldn’t stop you from enjoying a glass with some pasta. This scarpariello with fresh @mysticpastaboone 4 herb fettuccine and @newlifefarmnc tomatoes is perfect for the occasion. I grabbed a bottle of Palm rosé by @thewhisperingangel from my friends at @winemerchantsbodega because they have never steered me wrong.