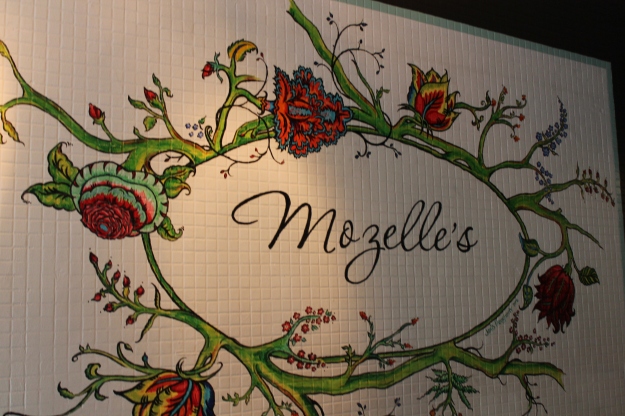 Don’t you hate it when you are craving Brunch on Saturday and you can’t find any place that serves it, except places that serve breakfast all the time? Brunch die-hards know it’s just not the same. Fortunately, Mozelle’s Fresh Southern Bistro is one of the few places you can get a wonderful brunch on Saturday in addition to Sunday (for you traditionalists). The foodies were after a place that served biscuits. You won’t find a lot of biscuits at brunch either so we scoured some menus and decided ultimately on Mozelle’s because they have all the other brunch greats like Benedicts, omelettes, salads and french toast PLUS biscuits.

I’ve been to Mozelle’s a few times, but this is my first brunch experience there. We quickly ordered some biscuits for the kidlets and then started making our choices. I decided on Mozelle’s Benedict with candied bacon, collards, chorizo gravy + fried egg on a brioche bun served with cheese grits and fruit.

I’m looking here and I just realize I don’t see the fruit. I don’t think I had any after all. Hmmm, don’t care. I wouldn’t have had room for it. The brioche was wonderfully soft and buttery good, the fried egg was just a little runny like I like and the collards and chorizo gravy were savory and delicious. Yummville. This is one of the top 2 Benedicts I’ve ever had. The chorizo gave it just enough spice and ethnic flavor without transporting you out of the South.

Mr. foodie stayed as health conscious as possible (when you are also getting biscuits) and ordered the California Omelette…Turkey, havarti, avocado and tomato marmalade with biscuit. It comes with a choice of breakfast potatoes or fruit. He decided to get fruit instead of potatoes (because he got biscuits). The omelette was light and delicious and the marmalade was a little sweet and acidic and offset the egg and avocado. Spot on California. Guilt-free, almost.

Kidlets shared two eggs and 2 strips of bacon and enjoyed their biscuits along the way. Oh about the biscuits. They were delightful. Warm, fluffy in the inside and golden on top with that familiar crispiness the tops of biscuits have.

We had our server bring along some honey for the biscuits and…apparently for bacon dipping….

I mean, who can blame the kid, really?

I said earlier that I’ve been to Mozelle’s Fresh Southern Bistro a couple of times. The menu changes seasonally and with what’s available but I do know that the Tomato Pie is always on the menu. It is incredible. It’s a homemade crust surrounding ripe, red tomatoes with an awesome cheesy grit filling. You can order whole pies or you can enjoy a slice at lunch, dinner or brunch (when the dinner menu is also available).  The meatloaf is a can’t miss. It’s a great combo of comfort food and gourmet. It comes bacon-wrapped with havarti, marmalade and served with collards and cheese grits. As an appetizer we LOVED the Lobster Sloppy Joe’s. The other time I’ve been to Mozelle’s, I ordered a braised beef special which was amazing. If you do hold out for dessert, be sure to try ANY of the chef’s signature desserts. The one I tried and loved was the Coconut Cream Pie. It was how you’d imagine it to be but with a hint of almond flavor that made it stand out from among its peers.

On this Saturday with a light snow falling, you’d expect the kitchen to be running maybe without the head chef. BUT! To the foodies delight, Chef Janis Karathanas was there and came over and introduced herself. I LOVE IT WHEN THE CHEF IS COOKING! Of course a testament to true genius and leadership is when the kitchen can do it without the beloved head, but I liked it that Chef Janis was there. We told her we hoped to see her again at the annual Fire in the Triad Competition this Spring.

Chef Janis and the peeps who make the ship sail…

Tamara who runs the Front of House and keeps things moving

I love Mozelle’s Fresh Southern Bistro for the food and the ambience. They have great outdoor sidewalk dining but even when you are inside, you sort of feel like you are outside because of the big windows. They even have blankets at chairs on every table in cooler months in case you feel the need to wrap yourself in snuggly warmth. It’s tiny, intimate and casual and the front part of the bistro puts you practically in the kitchen. Mozelle’s is open for lunch and dinner and brunch Saturday and Sunday.  They are also participating in The Big Eat, downtown Winston-Salem on Tuesday nights when said meatloaf is half price at $8.50.  That’s great reason to try them tonight! But try them, you should…very soon!

The tacos at @taqueriaelpasoboone are so good. Get the cabezas no matter what. Love this place.
Leftover of pulled bbq pork, @hedgefamilyfarm poblanos, tomatoes, jalapeños going from fridge to King Ranch Casserole inspo by @fedandfit. It has a creamy tomato gravy that’s basically an enchilada sauce and the fam ate this up.
I don’t know about y’all but I always plan to turn some of the fresh cranberry sauce into puff pastry bites. Believe it not we didn’t have that much leftover. Shocking, I know. And after a dessert the other night, all that was left of my @wewalka_usa puff pastry dough was enough for 5 bites. 5!! These lasted about 3 minutes, all eaten by me.
Jalapeño popper cheeseball inspo by @gimmedelicious. Perfect tailgate food today for all those big games. Serve with simple crackers. So good.
What do you do with all the leftover pork and mac that were over ordered from the local bbq joint? Make a mac & cheese bowl of course. When you let @thepedalinpig cater, you surely won’t starve for the next week.
Maybe on #tacotuesday you feel like a #cheeseburger. We loved these @howsweeteats Cheeseburger Tacos, special house sauce, lettuce, cheese, pickled red onions on a corn tortilla. 🤩 The kiddos gobbled these up.